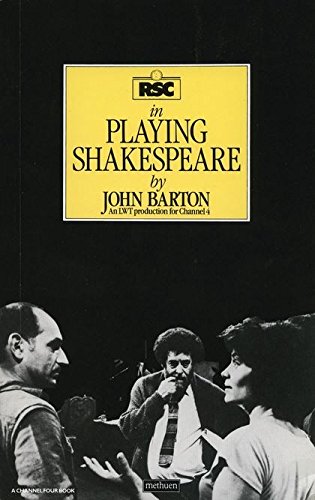 John Barton has been with the Royal Shakespeare Company since 1960 directing 26 of Shakespeare's plays for them. In the first half of the book, Barton attempts an objective analysis of how Shakespeare's text actually works, examining the use of verse and prose, set speeches and soliloquies, language and character. In the second half he concentrates on the more subjective areas such as irony and ambiguity, passion and coolness. The book springs from a nine-part London Weekend Television series, in which these various topics were investigated in front of the cameras by Barton and a group of well-known Shakespearean actors including Peggy Ashcroft, Tony Church, Sinead Cusack, Judi Dench, Susan Fleetwood, Mike Gwilym, Sheila Hancock, Lisa Harrow, Alan Howard, Ben Kingsley, Jane Lapotaire, Barbara Leigh-Hunt, Ian McKellen, Richard Pasco, Michael Pennington, Roger Rees, Norman Rodway, Donald Sinden, Patrick Stewart, David Suchet and Michael Williams.Useful for actors and scholars, this book will also aid teachers and students working on Shakespeare's plays in the classroom.

'A set text among actors, Playing Shakespeare best serves the layman in its general discussions of acting and Shakespeare's use of language.'
--thehamletweblog.blogspot.com (December 2009)

John Barton has been associate director of the Royal Shakespeare Company for more than thirty-five years and has directed more than fifty productions. He lives in London and conducts Shakespeare workshops throughout the U.K. and the U.S.