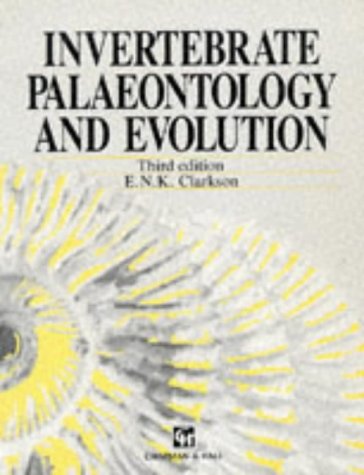 Fossils are of great value in interpreting the sedimentary environments in which they lived and the patterns and processes in the history of life. Their role in biostratigraphy is as important now as it ever was. In all respects palaeontology is is a vigorous and expanding subject, and will remain integral to geology for the foreseeable future. The third edition of "Invertebrate Palaeonotology and Evolution" has been extensively revised and retains the same format. In particular it contains a new treatment of evolution theory, new classifications of certain groups which are illustrated in range charts, and many new photographs and illustrations. The first part covers the basic principles of palaeontology - occurance of fossils, their preservation, classification and stratigraphic uses. Evolution and the fossil record is extensively treated, and the various mass extinction episodes that affected evolving life. In part two each of the major phyla of dominant marine invertebrates preserved in the fossil record is treated in turn. Their structure, functional design, classification, ecology and stratigraphic uses are all considered, and an up-to-date bibliography is given at the end of each chapter. A final chapter on exceptional faunas highlights the importance of rare kinds of preservation in establishing the diversity of faunas living at particular times. Undergraduate students of geology or earth science may find this a valuable core textbook. It may also be of interest to their teachers and some zoologists.

"Clarkson is unbeatable...if you are a genuine palaeontology student then you can currently do no better than this." Geological Magazine – December 1999

Invertebrate Palaeontology and Evolution is well established as the foremost palaeontology text at undergraduate level. This fully revised fourth edition includes a complete update of the sections on evolution and the fossil record, and the evolution of the early metazoans. New work on the classification of the major phyla (in particular brachiopods and molluscs) has been incorporated, and the section on trace fossils is extensively rewritten. The author has taken care to involve specialists in the major groups, to ensure the taxonomy is as up–to–date and accurate as possible.