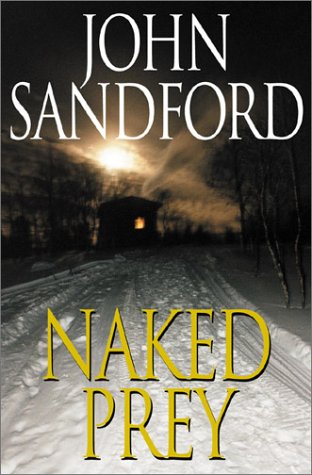 In Naked Prey, John Sandford puts Lucas Davenport through some changes. His old boss, Rose Marie Roux, has moved up to the state level and taken Lucas with her, creating for him a special troubleshooter job for the cases that are too complicated or politically touchy for others to handle. In addition, Lucas is married now, and a new father, all of which is fine with him; he doesn't mind being a family man. But he is a little worried. For every bit of peace you get, you have to pay - and he's waiting for the bill.
It comes in the form of two people found hanging from a tree in the woods of northern Minnesota. What makes the situation particularly sensitive is that the bodies are of a black man and a white woman, and they're naked. "Lynching" is the word that everybody's trying not to say, but as Lucas begins to discover, in fact the murders are not what they appear to be, and they are not the end of it. There is worse to come - much, much worse.

When 12-year-old muskrat trapper Letty West stumbles on the naked bodies of Jane Warr and Deon Cash, deep in the snowy woods of northern Minnesota, it's more than another bizarre episode in her already unusual life, as Lucas Davenport discovers in this new outing in Sandford's popular series featuring the midwestern lawman who moonlights as a computer game designer.

Lucas has a new wife, a new baby, and a new job as a political troubleshooter for his old boss Rose Marie Roux, but the blunt-spoken Davenport's instructions to hush the racially charged implications of what looks suspiciously like a lynching won't deter him from whoever left Warr and Cash twisting in the wind.

The well-peopled plot, involving a hot car ring, an ex-nun who smuggles cancer drugs over the Canadian border, and the usual internecine wranglings between the FBI, the local cops, and Davenport, races to a satisfying denouement, but this time it's a little girl with a difficult past and an uncertain future who lingers in the reader's mind. Fortunately, Sandford comes up with an ending that makes it all but certain that his fans will meet her again. Meanwhile, all the author's usual trademarks are on display--excellent writing, an interesting scenario, and terrific pacing. --Jane Adams, Amazon.com

Gripping new fiction from a prolific author who regularly tops the bestseller lists in the US. In the woods of northern Minnesota the bodies of a naked black man and a white woman are found hanging from a tree, apparently lynched. Lucas Davenport investigates; now married, a new father and lately relocated due to the promotion of his boss, Rose Marie Roux. This is, to put it mildly, a sensitive case, with issues of race and local history lurking in the background, yet these murders are not what they at first sight seem to be. Sandford builds up the tension and suspense from the outset, leaving the reader in the grip of another highly effective thriller. Not yet as well known here as he is in the US, but the reputation is growing.

Book Description Hardcover. Condition: New. Dust Jacket Condition: New. Lucas Davenport Ţnds some changes-and some nasty surprises-in store, in the chilling new novel by the number-one-bestselling author. In Naked Prey, John Sandford puts Lucas Davenport through some changes. His old boss, Rose Marie Roux, has moved up to the state level and taken Lucas with her, creating a special troubleshooter job for him for the cases that are too complicated or politically touchy for others to handle. In addition, Lucas is now married and a new father, both of which are fine with him: he doesn't mind being a family man. But he is a little worried. For every bit of peace you get, you have to pay-and he's waiting for the bill. Seller Inventory # 007445

Book Description Condition: New. Quality Books. Because We Care - Shipped from Canada. Usually ships within 1-2 business days. If you buy this book from us, we will donate a book to a local school. We donate 10,000+ books to local schools every year. If there are any problems, pleases ask us to resolve it amicably before leaving any feedback. Seller Inventory # R25115S