Items related to Major Problems in the Civil War and Reconstruction... 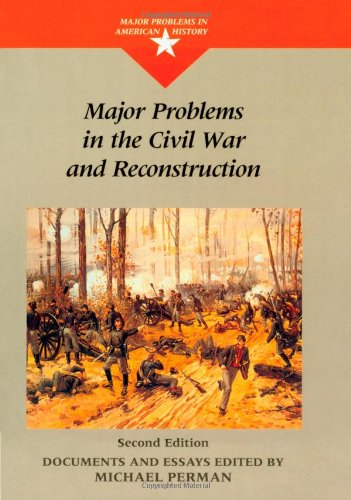 This best-selling title, designed to be either the primary anthology or textbook for the course, covers the Civil War's entire chronological span with a series of documents and essays.

Michael Perman is Professor of History and Research Professor in the Humanities at the University of Illinois at Chicago. He received his B.A. from Oxford University and Ph.D. from the University of Chicago, where his dissertation adviser was the late John Hope Franklin. He has published three books on the late nineteenth century South: REUNION WITHOUT COMPROMISE: THE SOUTH AND RECONSTRUCTION, 1865-1868 (1973); THE ROAD TO REDEMPTION: SOUTHERN POLITICS, 1869-1879 (1984), which won three book prizes; and STRUGGLE FOR MASTERY: DISFRANCHISEMENT IN THE SOUTH, 1888-1908 (2001). He has also written EMANCIPATION AND RECONSTRUCTION (2003) and, more recently, PURSUIT OF UNITY: A POLITICAL HISTORY OF THE AMERICAN SOUTH (2010). Perman was awarded a Guggenheim Fellowship in 1979-80 and was appointed the John Adams Distinguished Professor of American History at Utrecht University in the Netherlands in 2002-2003. In 2007, he gave the 69th Series of the Fleming Lectures in Southern History, soon to be published by Louisiana State University Press.

4. MAJOR PROBLEMS IN THE CIVIL WAR