Items related to The Digging-Est Dog (I Can Read It All by Myself Beginner...

Perkins, Al The Digging-Est Dog (I Can Read It All by Myself Beginner Books (Hardcover)) 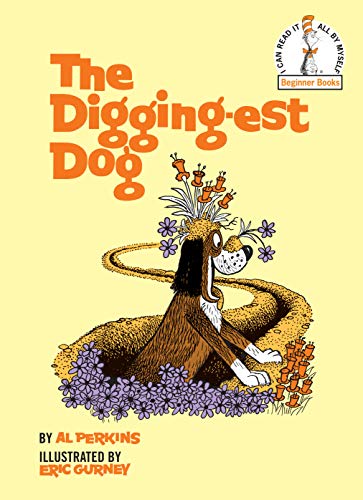 Illus. in full color. A dog who has to learn how to dig doesn't stop until
he has dug up the whole town.

Al Perkins was the author of several Bright and Early Books and Beginner Books, among them Hand, Hand, Fingers, Thumb; and The Ear Book. Perkins passed away in 1975.

Eric Gurney (1910-1992) was a well-known artist, cartoonist, and illustrator. Born in Canada, he later came to work for Walt Disney Studios in 1938, where he collaborated on Bambi and Pinocchio, among other films. He received a National Cartoonist Society Award for his work twice. He books include The Digging-est Dog, and Hand, Hand, Fingers, Thumb. From the Back Cover: