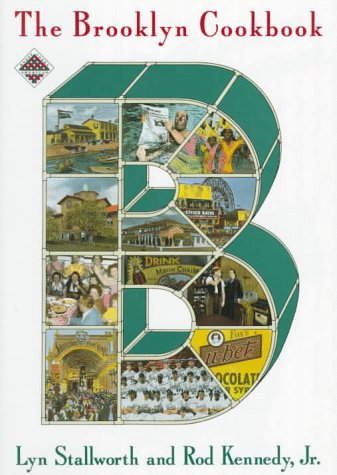 Lyn Stallworth has been a Brooklyn brownstoner for fourteen years; before that she lived in France, Greece, and Manhattan. Her Park Slope house was built in 1880. She is the author of several cookbooks and numerous magazine articles, and was senior editor of the magazine The Pleasures of Cooking. Ms. Stallworth researched and wrote for the Time-Life Books series Foods of the World, and wrote and edited books for the Beard/Glaser/Wolf Great Cooks series. She attended cooking schools in France, Mexico, and New York, and currently teaches cooking in the Culinary Arts program at New York's New School.

Despite the fact that his great-great-grandfather was trampled to death at the opening of the Brooklyn Bridge, Roderick Kennedy, Jr., still loves the borough of his antecedents. A collaborator on books about Atlantic City

been called the fourth largest city in America, and it is the Borough's claim that one out of every seven United States citizens has roots here. Brooklyn is also America's most celebrated hometown. Everybody knows where it is (across that bridge), and almost everybody has an opinion about it: don't the people say "boid" and "toity-toid," and act argumentative, brassy, and sassy? Sure they do -- at least some of them. They also say what they mean in other tongues, for groups from all over the world call Brooklyn home.

Brooklynites are fiercely loyal to neighborhood, family, and the food that nourishes them, body and soul. That is what this book celebrates ... I can hear you asking, What is Brooklyn food? What makes it special? No one claims that we have the kind of food that characterizes a region, such as Boston baked beans, Maryland crab cakes, or Philadelphia cheese steak. What defines our food is, in short, attitude and memory. The Brooklyn attitude is, "You r