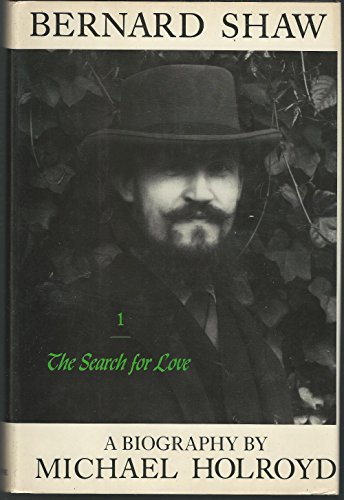 When Michael Holroyd's multivolume life of Bernard Shaw was published, it was hailed as a masterpiece, and William Golding predicted that it would take its place "among the great biographies." Now the biography is available for the first time in a lively and accessible abridgment by the author. This is the quintessence of Shaw. The narrative has a new verve and pace, and the light and shade of Shaw's world are more dramatically revealed as Holroyd counterpoints the private and public Shaw with inimitable insight and scholarship.
Playwright, wit, socialist, polemicist, vegetarian, and irresistible charmer, Bernard Shaw was the most controversial literary figure of his age, the scourge of Victorian values and middle-class pretensions. Born in Dublin in 1856, he grew up there, a lonely child in an unsettling ménage à trois. His father, George Carr Shaw, had turned to drink, and his mother was muse to a Svengali-like music teacher whom she followed to London. The young Shaw, anxious to escape his heritage, also left for London to reinvent himself as the legendary G.B.S.--novelist, lover, politician, music critic, and finally playwright. From his first passionate affair with a beautiful middle-aged widow, he moved on to flirtations and liaisons with young actresses and socialists before finally settling into marriage in 1898.
At the turn of the century, Shaw was in his prime, a theatrical impresario and author of those great campaigning plays--Man and Superman, Major Barbara, The Doctor's Dilemma, and John Bull's Other Island--that used laughter as an anesthetic for the operation he performed on British society. By 1914 the author of       Pygmalion was the most popular writer in England, and increasingly recognized throughout Europe and America. Though ready with advice to others on how to stay married, he fell painfully in love with two of the most dazzling actresses of the age, Ellen Terry and Mrs. Patrick Campbell.
The reluctant recipient of a Nobel Prize for literature and an Academy Award for his screenplay for     Pygmalion, Shaw became an international icon between the two world wars, feted from China and Soviet Russia to India and New Zealand, though still contriving to provoke the establishment in the United States, South Africa, and Ireland. In old age he was vigorous and prolific, espousing many new and quixotic causes. He       revealed himself increasingly as conjurer, fabulist, and seer through his powerful late works, including Saint Joan, the Chekhovian Heartbreak House, the modernist fantasy Back to Methuselah, and the imaginative dream plays and political extravaganzas.
Covering almost a century, from 1856 to 1950, this unparalleled life of Shaw presents the magnificent   double portrait of an age and of a man who was born fifty years too soon. Holroyd magically captures the essence of Shaw's protean genius in a tragicomedy that

Michael Holroyd was born in 1935 and is part Irish and half Swedish. He is the author of acclaimed biographies of Hugh Kingsmill, Lytton Strachey, and Augustus John. (The film Carrington, directed by Christopher Hampton, was based on his Lytton Strachey, and a film based on Augustus John is in preparation.) His four-     volume biography of Shaw was originally published between 1988 and 1992, after fifteen years of research and writing. Holroyd was awarded the CBE in 1989. He lives in London and Somerset and is married to the writer Margaret Drabble.