Items related to A History of Western Music

A History of Western Music 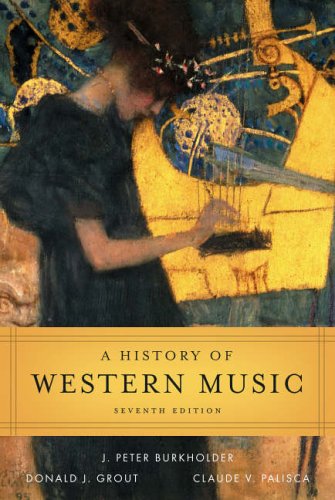 In a shift of emphasis, A History of Western Music places people making choices at the centre of the story, not as peripheral figures in the evolution of musical works and styles. Linking historical and social context directly to musical practice and styles, the book is organised around three central themes: people making choices; the tension between cultural tradition and musical innovation; and the values and tastes of producers and consumers. This edition restructures the text for greater accessibility, breaking it into small chapters within six sections; these are linked to form a single narrative thread.

"First rate.... I am frankly in awe of the achievement."

J. Peter Burkholder is Distinguished Professor of Musicology at Indiana University. He has written and edited four books on Charles Ives, as well as numerous articles on topics spanning from the Middle Ages to the twentieth century for The New Grove Dictionary of Music and Musicians, Journal of the American Musicological Society, Journal of Musicology, Musical Quarterly, 19th-Century Music, Music Theory Spectrum, and other journals. He has served as President, Vice President, and Director-at-Large of the American Musicological Society and on the board of the College Music Society. His writings have received awards from the American Musicological Society, the Society for American Music, and ASCAP. Donald Jay Grout, late professor of music at Cornell University, also wrote a standard history of opera. Claude V. Palisca, late professor of music at Yale University, began his collaboration on A History of Western Music with the Third Edition. Among his many publications are a history of Baroque music and a collection of scholarly essays on Italian Renaissance music.

1. A History of Western Music

2. A History of Western Music