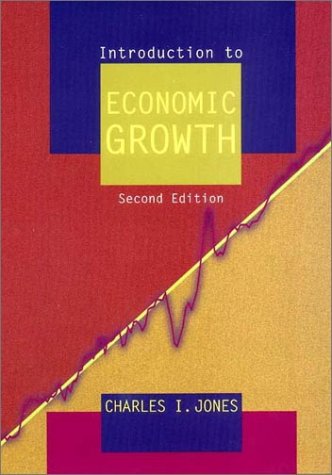 In Introduction to Economic Growth-the only text in the field designed specifically for advanced undergraduates-Charles I. Jones explains in clear, direct language how economists have come to understand the long-run growth of economies. Beginning with empirical evidence-how rich are the rich countries, how poor are the poor, and how fast do the rich and poor countries grow? -Professor Jones then presents the major theories of economic growth, from the Nobel Prize-winning work of Robert Solow to the new growth theory that has ignited the field in recent years.

Charles I. Jones is the STANCO Professor of Economics at the Stanford University Graduate School of Business. He is also a Research Associate at the National Bureau of Economic Research. He received his Ph.D. from MIT in 1993. He is well known for his research and papers on long-run economic growth. Jones is equally well known as an educator with a gift for distilling complicated subjects down to their essence and making them accessible to all levels of students. He is the author of Introduction to Economic Growth, Third Edition (2013).

Designed for advanced undergraduates, this text discusses economic growth, how economists have come to understand the growth of countries, how the poor are poor, and how fast rich and poor countries grow. The major theories of economic growth are then presented.

Book Description Condition: New. Brand new book. This is an international edition textbook with identical content as the US version. We ship all our orders from CA/IL, USA (depending on your address) and NOT from Asia! Buy with confidence from a 5-star US based seller. Choose expedited shipping for superfast delivery with tracking. Seller Inventory # 9780393977455