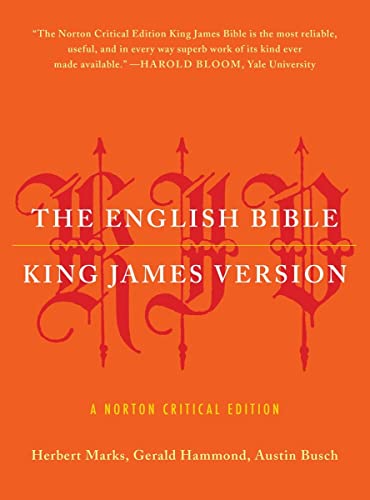 A stunning work of scholarship, the Norton Critical Edition of The English Bible, King James Version, is the most accessible edition available. These acclaimed volumes bring together succinct introductions to each biblical work, explanatory annotations, and contextual and critical materials. Archaic words are explained, textual problems are lucidly discussed, and stylistic features of the original texts are highlighted. For the Old Testament, Herbert Marks gives readers without Hebrew an entry into the complexities of biblical literature, reconstructing its original contexts, tracing its evolution, and pointing out productive strategies for reading. For the New Testament and the Apocrypha, Gerald Hammond and Austin M. Busch provide historical and cultural background while illuminating the complexity of the original texts. Both volumes include timelines, chronologies, diagrams, and color maps.

The most reliable, useful, and in every way superb work of its kind ever made available.--Harold Bloom, Yale University

No serious reader can be without this two-volume set.--Steve Donoghue, Open Letters Monthly Arts and Literature Review