Items related to Poetry and Commitment 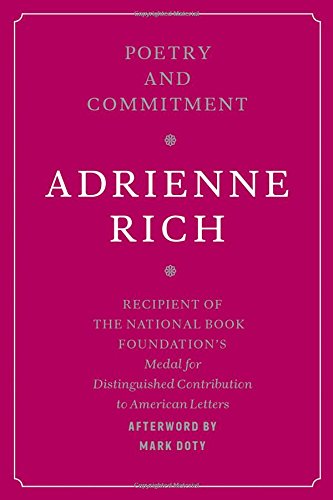 With passion, critical questioning, and humor, Adrienne Rich suggests how poetry has actually been lived in the world, past and present. In this essay, which was the basis for her speech upon accepting the National Book Foundation's Medal for Distinguished Contribution to American Letters, she ranges among themes including poetry's disparagement as "either immoral or unprofitable," the politics of translation, how poetry enters into extreme situations, different poetries as conversations across place and time. In its openness to many voices, Poetry and Commitment offers a perspective on poetry in an ever more divided and violent world. "I hope never to idealize poetry-it has suffered enough from that. Poetry is not a healing lotion, an emotional massage, a kind of linguistic aromatherapy. Neither is it a blueprint, nor an instruction manual, nor a billboard."

Widely read, widely anthologized, widely interviewed, and widely taught, Adrienne Rich (1929-2012) was for decades among the most influential writers of the feminist movement and one of the best-known American public intellectuals. She wrote two dozen volumes of poetry and more than a half-dozen of prose. Her constellation of honors includes two National Book Awards, a MacArthur Foundation "genius" grant, and a Medal for Distinguished Contribution to American Letters by the National Book Foundation. Ms. Rich's volumes of poetry include The Dream of a Common Language, A Wild Patience Has Taken Me This Far, An Atlas of the Difficult World, The School Among the Ruins, and Telephone Ringing in the Labyrinth. Her prose includes the essay collections On Lies, Secrets, and Silence; Blood, Bread, and Poetry; an influential essay, "Compulsory Heterosexuality and Lesbian Existence," and the nonfiction book Of Woman Born, which examines the institution of motherhood as a socio-historic construct. In 2010, she was honored with The Griffin Trust for Excellence in Poetry's Lifetime Recognition Award. Mark Doty is the author of more than ten volumes of poetry and three memoirs. His many honors include the National Book Award, National Book Critics Circle Award, the PEN/Martha Albrand Award for First Nonfiction, the Los Angeles Times Book Prize, a Whiting Writers' Award, a Lila Wallace-Reader's Digest Writers' Award, and, in the UK, the T. S. Eliot Prize. He is a professor at Rutgers University and lives in New York City.