Items related to The Decoration of Houses (Classical America Series...

The Decoration of Houses (Classical America Series in Art & Architecture) 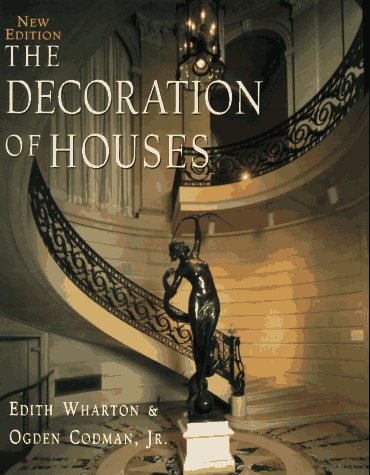 The original text of The Decoration of Houses continues without revision as an authentic classic, perhaps the most important book of its kind ever published. Its carefully reasoned chapters on such aspects of house interiors as fireplaces, ceilings and floors, halls and stairs, are of the greatest value to professionals and serious amateurs concerned with interiors.This expanded edition includes an introduction by Henry Hope Reed and three critical essays by John Barrington Bayley, William A. Coles, and Alvin Holm, AIA. Additions to the album of renderings and photographs of modern and contemporary work in the tradition of Wharton and Codman include a number of important works done in the last decade or so. A portfolio of color plates new to the expanded edition offers the work of such accomplished photographers as Bill Ray and Anne Day.

Edith Wharton (born Edith Newbold Jones; January 24, 1862 - August 11, 1937) was a Pulitzer Prize-winning American novelist, short story writer, and designer. She was nominated for the Nobel Prize in Literature in 1927, 1928 and 1930. Wharton combined her insider's view of America's privileged classes with a brilliant, natural wit to write humorous, incisive novels and short stories of social and psychological insight. She was well acquainted with many of her era's other literary and public figures, including Theodore Roosevelt.

Novelist Edith Wharton and architect Ogden Codman collaborated to create this book on the decorative arts, first published in 1897. It aims to provide a complete plan for the architectural decoration of a "proper" residence in the classical tradition. This edition contains new colour photographs.

1. The Decoration of Houses (CLASSICAL AMERICA SERIES IN ART AND ARCHITECTURE)

2. The Decoration of Houses (CLASSICAL AMERICA SERIES IN ART AND ARCHITECTURE)

3. The Decoration of Houses (Classical America Series in Art & Architecture)

4. THE DECORATION OF HOUSES (CLASSI