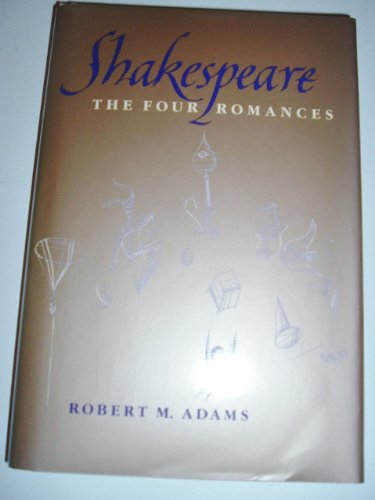 "Pericles", "Cymbeline", "The Winter's Tale" and "The Tempest": these are the last plays that Shakespeare wrote and they have bewildered and intrigued critics, directors, actors and readers for generations. In this book, Robert Adams helps to overcome the bewilderment and understand the intrigue. Why are these plays called "romances"? The Romantic tradition in literature stretches back to the Middle Ages. It is, as Adams writes, a "mysterious, half-denied country which cannot be limited, only explored - the world of quest and conflict, of erotic and religious seeking, of chivalric and pastoral adventure". These plays share much with each other and less with Shakespeare's earlier works. Because they are "mysterious", critics have encumbered them with much fanciful theorizing. Adam's elucidates the plays with little theorizing and with much witty common sense.

Robert M. Adams was Professor of English (Emeritus) at the University of California at Los Angeles. He was the author of many books, including Ikon: John Milton and the Modern Critics; Strains of Discord; Proteus, His Lies, His Truth: Discussion of Literary Translation; The Land and Literature of England; and Shakespeare--The Four Romances. In addition to the Norton Critical Edition of Utopia (he was translator and editor of the First and Second Editions), Professor Adams was editor of five other Norton Critical Editions, including The Prince by Machiavelli, Candide by Voltaire, and The Praise of Folly and Other Writings by Erasmus, the texts of which he also translated. He was a founding editor of The Norton Anthology of English Literature.