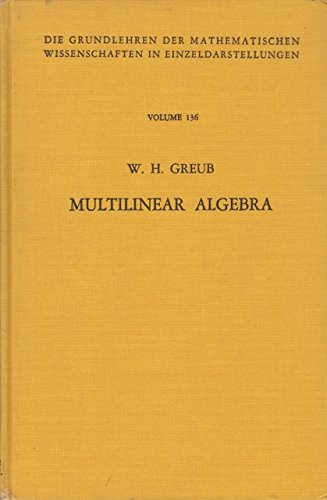 This book is a revised version of the first edition and is intended as a Linear Algebra sequel and companion volume to the fourth edition of (Graduate Texts in Mathematics 23). As before, the terminology and basic results of Linear Algebra are frequently used without refer~nce. In particular, the reader should be familiar with Chapters 1-5 and the first part of Chapter 6 of that book, although other sections are occasionally used. In this new version of Multilinear Algebra, Chapters 1-5 remain essen­ tially unchanged from the previous edition. Chapter 6 has been completely rewritten and split into three (Chapters 6, 7, and 8). Some of the proofs have been simplified and a substantial amount of new material has been added. This applies particularly to the study of characteristic coefficients and the Pfaffian. The old Chapter 7 remains as it stood, except that it is now Chapter 9. The old Chapter 8 has been suppressed and the material which it con­ tained (multilinear functions) has been relocated at the end of Chapters 3, 5, and 9. The last two chapters on Clifford algebras and their representations are completely new. In view of the growing importance of Clifford algebras and the relatively few references available, it was felt that these chapters would be useful to both mathematicians and physicists.