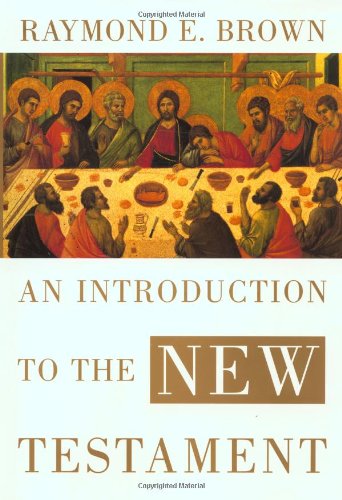 An accessible, comprehensive introduction to the New Testament leads beginners through the basic content and issues presented in the New Testament and offers summaries of each book, a historical overview of the ancient world, maps, and much more.

"A truly magnificent book, composed by our Catholic national treasure."-Commonweal

"No book can do everything, not even in 850 pages, and no author can encompass the whole wealth of contemporary thought. Father Brown's forthright declaration of his convictions in the foreword and his resolute defense of them in his exegesis rest on a robust confidence in reason and a moderate and balanced traditionalism. This judicious and reassuring approach may comfort many."--The New York Times Book Review, Anthony J. Saldarini

"During his career, Brown (emeritus, biblical studies, Union Theological Seminary, New York) has enlightened and challenged scholars. Here he brings his extensive knowledge to bear in a volume primarily for beginners, though it will serve equally well those who are not. Because of the intended audience, he has made certain choices about content and form. First, he focuses on the established 27-book New Testament canon based upon the 'wide agreement about the twenty-seven works to be included in a normative or canonical collection.' Second, he deemphasizes the prehistory of the documents (sources, editions, and so forth) and emphasizes the documents in their canonical form. He begins most chapters with a 'General Analysis of the Message' and addresses issues such as authorship, date, and composition afterward. So, for example, readers are helped to understand the individual messages of Matthew, Mark, and Luke without getting bogged down in the 'synoptic problem.' Due to his emphasis on the finished form of the New Testament documents, even those who disagree with some of the author's critical judgments will benefit from this volume. Highly recommended for public and academic libraries."--Library Journal

"A truly magnificent book, composed by our Catholic national treasure."--Commonweal

"A tour de force by a great scholarly mind."--America

Raymond E. Brown, S.S., taught for many years at Saint Mary's Seminary in Baltimore and was Professor of Biblical Studies at the Union Theological Seminary for two decades. He was the author of three books in the Anchor Bible series on the Gospels and Epistles of John and wrote the classic Anchor Bible Reference Library volumes The Birth of the Messiah, The Death of the Messiah, and An Introduction to the New Testament. He died in 1998. Francis J. Maloney, S.D.B., is Katherine Drexel Chair for Religious Studies at the Catholic University of America in Washington, D.C. Among his many distinguished books are The Gospel of John, A Hard Saying: The Gospel and Culture, and The Gospel of Mark.

1. An Introduction to the New Testament (Anchor Bible Reference Library)

2. An Introduction to the New Testament (Anchor Bible Reference Library)

3. An Introduction to the New Testament (Anchor Bible Reference Library)

4. Introduction to the New Testament