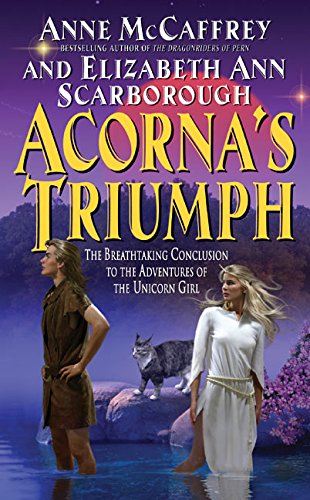 Aari has returned! Now he and his lifemate, the brave and beautiful Acorna, can finish rebuilding their once-decimated homeworld. Yet Aari's travels through time have left him oddly changed, and he barely remembers Acorna or their love. And as Aari's actions turn more sinister, Acorna must shift her attention to stopping the destruction of innocents by a vicious criminal. It is precisely the sort of weakness and confusion the dreaded Khleevi have been hoping for, as the brutal insectile oppressors set in motion their final invasion and the total destruction of the Linyaari and the conquest of their world. Though Acorna's heart is wounded, her courage and determination must remain strong in this dark time -- for only then will she be able to rescue the Aari she knows and adores, and halt the bloodthirsty alien menace for good and for all.

Continuing the amazing adventures of the unicorn girl.

Anne McCaffrey, a multiple Hugo and Nebula Award winner, was one of the world's most beloved and bestselling science fiction and fantasy writers. She is known for her hugely successful Dragonriders of Pern books, as well as the fantasy series that she cowrote with Elizabeth A. Scarborough that began with Acorna: The Unicorn Girl.

Elizabeth Ann Scarborough is the author of Channeling Cleopatra and the Nebula Award-winning The Healer's War, as well as more than twenty science fiction and fantasy novels. She lives in the Puget Sound area of Washington State.