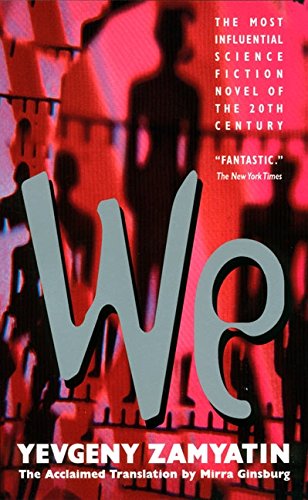 In the One State of the great Benefactor, there are no individuals, only numbers. Life is an ongoing process of mathematical precision, a perfectly balanced equation. Primitive passions and instincts have been subdued. Even nature has been defeated, banished behind the Green Wall. But one frontier remains: outer space. Now, with the creation of the spaceship Integral, that frontier -- and whatever alien species are to be found there -- will be subjugated to the beneficent yoke of reason.

One number, D-503, chief architect of the Integral, decides to record his thoughts in the final days before the launch for the benefit of less advanced societies. But a chance meeting with the beautiful 1-330 results in an unexpected discovery that threatens everything D-503 believes about himself and the One State. The discovery -- or rediscovery -- of inner space...and that disease the ancients called the soul.

A page-turning SF adventure, a masterpiece of wit and black humor that accurately predicted the horrors of Stalinism, We is the classic dystopian novel. Its message of hope and warning is as timely at the end of the twentieth century as it was at the beginning.

"As the first major anti-utopian fantasy ... has its own peculiar wryness and grace, sharper than the pamphleteering of 1984 or the philosophical schema of Brave New World, its celebrated descendants". -- Kirkus Reviews

""We" is one of the great novels of the twentieth century."-- Irving Howe"One of the best!"-- "New York Review of Books""As the first major anti-utopian fantasy . . . "We has its own peculiar wryness and grace, sharper than the pamphleteering of "1984" or thephilosophical scheme of "Brave New World, " its celebrated descendants."-- "Kirkus Reviews""Fantastic."-- "The New York Times"

Yevgeny Zamyatin was born in Russia in 1884. Arrested during the abortive 1905 revolution, he was exiled twice from St. Petersburg, then given amnesty in 1913. We, composed in 1920 and 1921, elicited attacks from party-line critics and writers. In 1929, the Russian Association of Proletarian Writers launched an all-out attack against him. Denied the right to publish his work, he requested permission to leave Russia, which Stalin granted in 1931. Zamyatin went to Paris, where he died in 1937.

Mirra Ginsburg is a distinguished translator of Russian and Yiddish works by such well-known authors as Mikhail Bulgakov, Isaac Babel, Isaac Bashevis Singer, and Fyodor Dostoevsky. Editor and translator of three anthologies of Soviet science fiction, she has also edited and translated A Soviet Heretic: Essays by Yevgeny Zamyatin, and History of Soviet Literature by Vera Alexandrova.

Book Description Mass Market Paperback. Condition: New. Firefly sells new and used books through our store front. We try to add a detailed description to as many titles as possible. If you have questions regarding this title, please contact us. Photos available on request. Seller Inventory # 318500