Items related to Horton Hears a Who Pop-Up!

Horton Hears a Who Pop-Up! 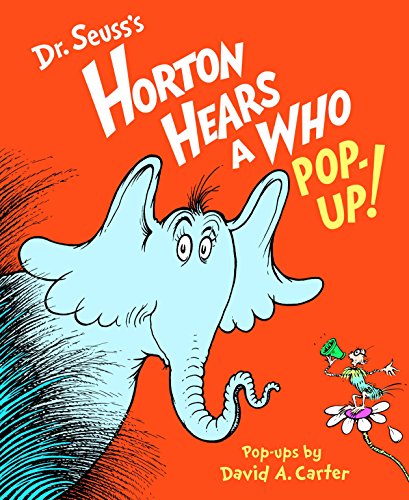 Unlike other pop-up adaptations that use text abridgments, this book contains the complete text of Horton Hears a Who! David A. Carter has skillfully followed Seuss's signature pacing by alternating five big, blow-out pop-ups with 11 booklets, pull tabs galore, and many special effects. In all, ten glorious spreads bring this classic to life in magnificent full color.

Review, Parents, January 2009:
"Through his efforts to save an invisible creature who lives on a speck of dust, the elephant in this Dr. Seuss classic displays kindness and determination-and provides plenty of laughs."

David A. Carter is the author of 75 pop-up books, including the best-selling Bugs in a Box (R) series that has sold more than 6 million copies. He is also the creator of the magnificent pop-ups One Red Dot and Two Blue. David lives with his wife and two daughters in Auburn, California.

Dr. Seuss was born Theodor Geisel in Springfield, Massachusetts on March 2, 1904. After attending Dartmouth College and Oxford University, he began a career in advertising. His advertising cartoons, featuring Quick, Henry, the Flit!, appeared in several leading American magazines. Dr. Seuss's first children's book, And To Think That I Saw It On Mulberry Street, hit the market in 1937, and the world of children's literature was changed forever! In 1957, Seuss's The Cat in the Hat became the prototype for one of Random House's best- selling series, Beginner Books. This popular series combined engaging stories with outrageous illustrations and playful sounds to teach basic reading skills. Brilliant, playful, and always respectful of children, Dr. Seuss charmed his way into the consciousness of four generations of youngsters and parents. In the process, he helped kids learn to read. Winner of the Pulitzer Prize in 1984 and three Academy Awards, Seuss was the author and illustrator of 44 children's books, some of which have been made into audiocassettes, animated television specials, and videos for children of all ages. Even after his death in 1991, Dr. Seuss continues to be the best-selling author of children's books in the world.