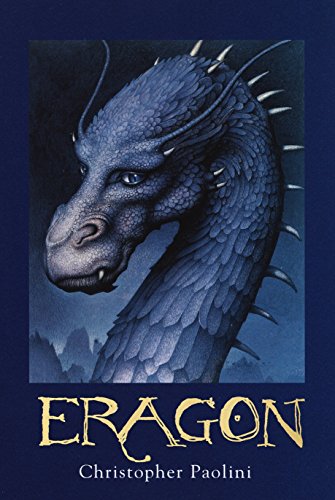 Don't miss the latest book from the author of Eragon, The Fork, the Witch, and the Worm: Tales from Alagaësia!

Perfect for fans of Lord of the Rings, the New York Times bestselling Inheritance Cycle about the dragon rider Eragon has sold over 35 million copies and is an international fantasy sensation. Fifteen-year-old Eragon believes that he is merely a poor farm boy--until his destiny as a Dragon Rider is revealed. Gifted with only an ancient sword, a loyal dragon, and sage advice from an old storyteller, Eragon is soon swept into a dangerous tapestry of magic, glory, and power. Now his choices could save--or destroy--the Empire. "An authentic work of great talent."--The New York Times Book Review "Christopher Paolini make[s] literary magic with his precocious debut."--People "Unusual, powerful, fresh, and fluid."--Booklist, Starred "An auspicious beginning to both career and series." --Publishers Weekly A New York Times Bestseller A USA Today Bestseller A Wall Street Journal Bestseller A Book Sense Bestseller

There's always room for another fantasy quest trilogy--as long as it has distinction, originality and a cracking plot. Eragon has. This is the first book in Christopher Paolini's Inheritance Trilogy, which he began writing when aged only 15, is an amazing debut that demonstrates a written maturity beyond its creator's years. Any rough edges borne through inexperience are quickly forgiven as his story takes the reader on an imaginative journey by way of a host of likable and interesting characters and several breathtaking and dramatic sequences of high fantasy.

Eragon's adventure begins when he is out hunting one day in the mountainous region of his world known as the Spine. While eyeing-up a tasty deer with his bow, his aim is disturbed by a polished blue stone that explodes from the sky and narrowly misses him. The oval shaped object, cool and frictionless to his touch, weighs several pounds and it turns out to be his only reward from his day's hunting session. Returning to his home town Carvahall, Eragon's unsuccessful attempts to exchange the stone for meat for his family begins a run of bad luck that will eventually force him to flee his place of birth. This heralds the beginning of a new destiny for him.

The stone is in fact a dragon's egg and it hatches in Eragon's company--making him the first new Dragon Rider for many years. Suddenly, the fate of the Empire rests in his hands and he must navigate a dark and dangerous terrain, and some formidable enemies, to challenge the might of a king whose evil is limitless.

Despite its classic quest format there are enough new ideas and twists and turns to make it stand out among its legion of competitors in the genre. Eragon begins a bigger story that continues with the follow-up Eldest. Suitable for readers aged 12 and over. --John McLay

2004 Book Sense Book of the Year A USA Today Bestseller A #1 Publishers Weekly Bestseller A Wall Street Journal Bestseller A Book Sense Bestseller "Full praise to Eragon, and I want more! A winner . . . tip of the hat to young master Paolini."--Anne McCaffrey, author of The Dragonriders of Pern series "Christopher Paolini make[s] literary magic with his precocious debut."--People "An authentic work of great talent . . . I found myself dreaming about it at night, and reaching for it as soon as I woke." ─Liz Rosenberg, The New York Times Book Review "Unusual, powerful . . . fresh and fluid. An impressive start to a writing career that's sure to flourish." --Booklist, Starred "An auspicious beginning to both career and series."--Publishers Weekly "Will appeal to legions of readers who have been captivated by the Lord of the Rings trilogy."--School Library Journal

Book Description Hardcover. Condition: New. Hardcover. Fifteen-year-old Eragon believes that he is merely a poor farm boy?until his destiny as a Dragon Rider is revealed. Gifted with only an ancient sword, a loyal dragon, and sage advice.Shipping may be from multiple locations in the US or from the UK, depending on stock availability. 528 pages. 0.800. Seller Inventory # 9780375826689