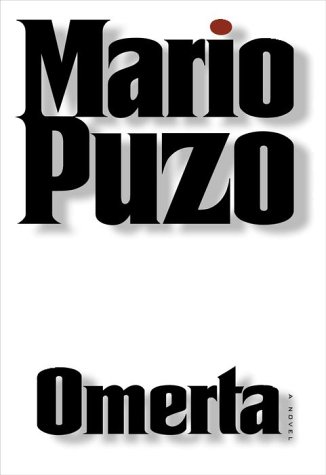 In a darkly comic novel by the author of The Godfather, Don Raymonde Aprile, now retired, and FBI agent Kurt Cilke, engage in one last war with the distinctions between "good guys" and "bad guys" getting lost in the shuffle. (General Fiction)

Mario Puzo, author of eight novels, will eternally be known for one book: The Godfather. It's true that this is no mean legacy but it should be remembered that Puzo's output has included some considerable novels, notably The Sicilian and The Last Don. His new book, Omertà is unquestionably the finest of his latter-day work, a sweeping, violent epic with brilliantly precise characterisations.

Omertàis the Sicilian code of silence, the essential element by which the Mafia has maintained its power over the centuries. Puzo is interested in the way in which changing times have forced organised crime to adapt, however painful the process. The code is tested when a mob boss, Don Aprile, is brutally murdered in New York. Both Astorre, Aprile's nephew, and Cilke, the New York FBI chief, launch investigations into the killing. It soon becomes clear to both men that a grim conspiracy has spread its tentacles across rival gangs, corrupt bankers and even the courts. Much blood must be spilled before the killers are found--there are many (on both sides of the law) who will do their best to stop this happening.

Puzo's favourite theme--the interchangeability of big business and organised crime--is handled with his customary panache. However much we may disapprove of the horrifically violent Mafiosi, we remain riveted by their implacable cold-bloodedness. Astorre has all the complexity of Michael Corleone (even if we've been here before) but Cilke is a new departure for the author--a lawman who is quite as powerfully characterised as Puzo's criminal protagonists.

It goes without saying that the grisly set-pieces are handled with the usual élan:

The car sped up and stopped as the Don reached the last step. Stace jumped out of the back seat--in one quick move he rested his gun on the roof. He shot two-handed. He only shot twice. The first bullet hit the Don square in the forehead. The second bullet tore out his throat. His blood spurted all over the sidewalk, showering yellow sunlight with pink drops.

"Here is all the classic material of Mafia mythology ... spins a spell all its own" (The Times)

"Puzo's genius was to create a world so thick with personality and acknowledged rules of behaviour, along with its crime and violence, that reading his books becomes a seriously guilty pleasure" (New York Post)