Items related to Luring a Lady 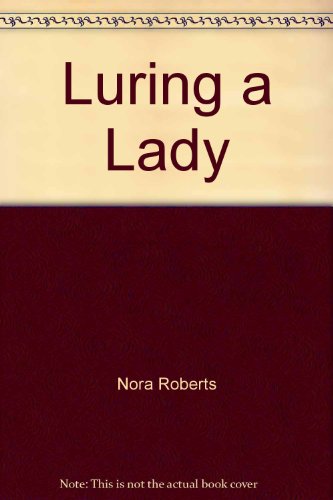 Is he the man to melt the ice queen?

Nothing in Sydney Hayward’s background of wealth and privilege has prepared her to take the helm of her family’s company.

The pressure leaves no room for complications... Mikhail Stanislaski is definitely a complication. The rugged carpenter comes from a world so different to her own and he challenges her on every decision she makes. Sydney likes being in control and she’s keeping her distance from Mikhail – but opposites can’t help attracting!

Nora Roberts is a publishing phenomenon; this New York Times bestselling author of over 200 novels has more than 450 million of her books in print worldwide.

'The most successful novelist on Planet Earth' - Washington Post

‘A storyteller of immeasurable diversity and talent’ - Publisher’s Weekly

NORA ROBERTS No.1 New York Times bestselling author Nora Roberts is "a word artist, painting her story and characters with vitality and verve," according to the Los Angeles Daily News. She has published over a hundred novels, and her work has been optioned and made into films, excerpted in Good Housekeeping, and has been translated into over twenty-five different languages and published all over the world. With over 400 million copies of her books in print worldwide, she is truly a publishing phenomenon.

Book Description Silhouette Books, 1992. Paperback. Condition: Used; Good. **SHIPPED FROM UK** We believe you will be completely satisfied with our quick and reliable service. All orders are dispatched as swiftly as possible! Buy with confidence! Aloysius Ihezie. Seller Inventory # mon0000511409

Book Description Paperback. Condition: Good. The book has been read but remains in clean condition. All pages are intact and the cover is intact. Some minor wear to the spine. Seller Inventory # GOR002898476

Book Description Paperback. Condition: Very Good. The book has been read, but is in excellent condition. Pages are intact and not marred by notes or highlighting. The spine remains undamaged. Seller Inventory # GOR004113699