Items related to Our Man in Havana

Greene, Graham Our Man in Havana

Our Man in Havana 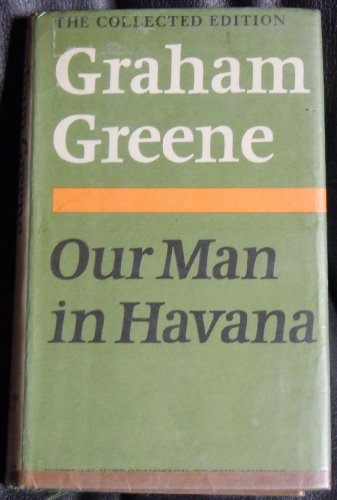 Wormold, a vacuum-cleaner salesman, was short of money, so he accepted an offer of $300-plus a month and became M16's man in Havana. To keep his job, he files bogus reports and dreams up military installations from vacuum-cleaner designs. Then his stories start becoming disturbingly true.

"Comical, satirical, atmospherical." -- "Daily Telegraph""Graham Greene had wit and grace and character and story and a transcendent universal compassion that places him for all time in the ranks of world literature." -- John Le Carre "He had a sharp nose for trouble and injustice. In Our Man in Havana -- a witty send-up of an agent's life -- it was Cuba before Castro." -- "Financial Times" "From the Trade Paperback edition."

1. Our Man in Havana

Book Description The Bodley Head Ltd, 1970. Condition: Good. This is an ex-library book and may have the usual library/used-book markings inside.This book has hardback covers. In good all round condition. Dust Jacket in good condition. Please note the Image in this listing is a stock photo and may not match the covers of the actual item,500grams, ISBN:0370014286. Seller Inventory # 6742520

2. Our Man in Havana