Items related to Girl at War 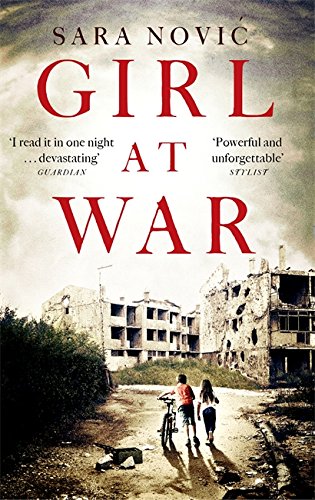 LONGLISTED FOR THE BAILEYS WOMEN'S PRIZE FOR FICTION 2016

Growing up in Zagreb in the summer of 1991, 10-year-old Ana Juric is a carefree tomboy; she runs the streets with her best friend, Luka, helps take care of her baby sister, Rahela, and idolizes her father. But when civil war breaks out across Yugoslavia, football games and school lessons are supplanted by sniper fire and air raid drills.

The brutal ethnic cleansing of Croats and Bosnians tragically changes Ana's life, and she is lost to a world of genocide and child soldiers; a daring escape plan to America becomes her only chance for survival. Ten years later she returns to Croatia, a young woman struggling to belong to either country, forced to confront the trauma of her past and rediscover the place that was once her home.

[A] powerful, superbly written debut (Paperbacks of the Week, Mail on Sunday)

Set against the backdrop of the Bosnian Croat war, this vivid debut recalls Half of a Yellow Sun. Main character Ana's journey from a ten-year-old tomboy to young woman will leave you reeling (Stylist)

I read it in one night...devastating...Novic excels at distilling visual poetry from action scenes . . . [she] has breathed fire and ice into these pages. Immersing herself in the darkest materials, she has given us the real stuff dystopian fantasies are made of (Guardian)

An outstanding first novel . . . Girl at War performs the miracle of making the stories of broken lives in a distant country feel as large and universal as myth (New York Times Book Review (Editor's Choice))

Astonishing . . . Girl at War is an extraordinarily poised and potent debut novel, a story about grief and exile, memory and identity, and the redemptive power of love (Financial Times)

A shattering debut . . . The book begins with what deserves to become one of contemporary literature's more memorable opening lines. The sentences that follow are equally as lyrical as a folk lament and as taut as metal wire wrapped through an electrified fence (USA Today)

Novic's debut novel draws on her personal experiences of the break-up of the former Yugoslavia to craft a fiction that is heartfelt, in places harrowing, but ultimately redemptive (Mail on Sunday)

From its first sentence, Sara Novic's debut novel unfolds on both intimate and immense scales . . . The first section ends with a brilliantly abrupt, devastating event that essentially ends Ana's childhood. It's a scene that haunts the rest of the book . . . [Novic is]a writer whose own gravity and talent anchor this novel (New York Times)

The first third of this gripping debut novel depicts the start of the Yugoslavian civil war through the eyes of Ana Juric, a ten-year-old girl residing with her family in Croatia's capital . . . Through Ana's journey, Novic, in tender and eloquent prose, explores the challenge of how to live even after one has survived (Oprah magazine)

If we looked for and celebrated a "book of the summer" as we do that one song every year (what will it be this year?!), this novel would surely be this summer's star. This debut work from a rising author examines in painful, tender detail the cost of war on a young woman, many years after her simple life with her family in Croatia was interrupted by war. Ana, the main character, is haunted by the memories of what she thought her country once was, and how to deal with the secrets of what really happened to her and her family. (Vanity Fair)

Book Description 2016. Paperback. Condition: New. Paperback. LONGLISTED FOR THE BAILEYS WOMEN'S PRIZE FOR FICTION 2016Growing up in Zagreb in the summer of 1991, 10-year-old Ana Juric is a carefree tomboy; she runs the streets with her best friend, .Shipping may be from multiple locations in the US or from the UK, depending on stock availability. 336 pages. 0.232. Seller Inventory # 9780349140988

Book Description 2016. Paperback. Condition: New. Paperback. LONGLISTED FOR THE BAILEYS WOMEN'S PRIZE FOR FICTION 2016Growing up in Zagreb in the summer of 1991, 10-year-old Ana Juric is a carefree tomboy; she runs the streets with her .Shipping may be from our Sydney, NSW warehouse or from our UK or US warehouse, depending on stock availability. 336 pages. 0.232. Seller Inventory # 9780349140988