Items related to God's Terrorists: The Wahhabi Cult and the Hidden...

God's Terrorists: The Wahhabi Cult and the Hidden Roots of Modern Jihad 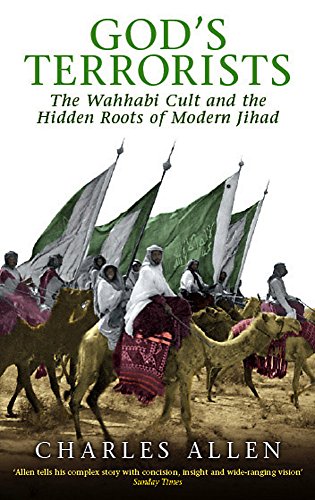 The brutal assasination of Commissioner Frederick Mackeson on British India's North-West Frontier in 1853 was a bloody and public declaration of a conflict that was to stretch well into the next one hundred and fifty years. The Wahhabi tribe, extreme Islamist fundamentalists, set out to restore purity to their faith by declaring violent jihad on all who opposed them. Their history has long been forgotten and yet their vicious brand of political ideology lives on. The Wahhabi deeply influenced not only the formation of modern Saudi Arabia, but Osama bin Laden and the Taliban. Their teachings educate orphan boys in Afghanistan and press rifles into their hands, for the sake of jihad.

The parallels between this pivotal terrorist network and our post-9/11 political climate are staggering. Charles Allen sheds lights on the historical roots of modern terrorism and shows how this dangerous nineteenth-century theology lives on today.

Allen traces the story with meticulous care. Steeped in the subject and already respected as an authority, he commands all the detail . . . Allen's approach is exemplary (THE TIMES)

Those who relish Allen's India books will not be disappointed...Rich in instruction for the current administration in, say, Basra - and better still, it's vintage Charles Allen (LITERARY REVIEW)

A fascinating history of the religious fanatics that would come to be known as the founding fathers of Islamic terrorism and who set down the intellectual roots of Al Queda.

1. God's Terrorists: The Wahhabi Cult and the Hidden Roots of Modern Jihad