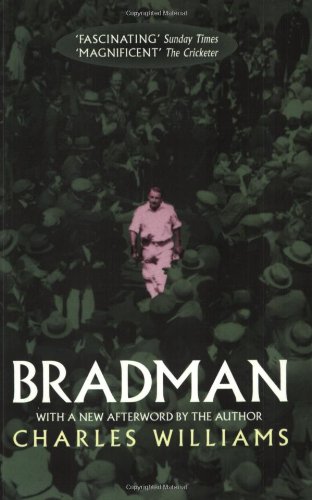 BRADMAN is a masterly portrait of cricket's supreme batsman and Australia's greatest hero. Uniquely among biographers of Don Bradman, Charles Williams sets his subject's cricketing achievements within the context of a crucial period in the history of modern Australia, a time when, as the country felt her way towards something that the world would recognise as 'nationhood', Bradman became a focus for national aspirations, a figure of unique status. Brilliantly revealing the phenomenon of Bradman's cricketing genius and the tensions that genius created for the man, his family, team-mates and the game's administrators - Williams' story is as much about Australia as it is a great Australian

It would be stupid to say I enjoyed or agreed with every word, every sentence, and every nuance, but I honestly believe it is a splendid production (SIR DONALD BRADMAN)

Sir Donald Bradman was not just the best cricketer ever, but the best sportsman the world has seen (Simon Barnes, The TIMES)

* Subtitled 'An Australian Hero', Charles Williams' masterly biography of the greatest cricketer of them all definitively sets Donald Bradman (1908-2001) in his historical context.