Items related to Origins Reconsidered: In Search of What Makes Us Human

Origins Reconsidered: In Search of What Makes Us Human 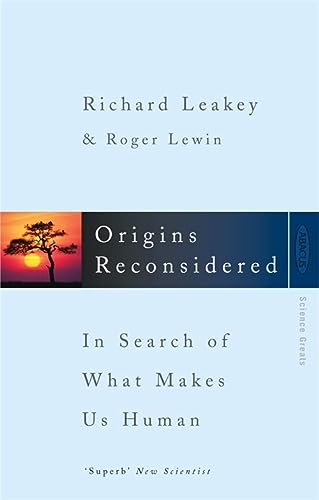 Richard Leakey questions the widely accepted idea of a 2 million-year-old ancestry of hunters and gatherers - the men hunting, the women raising children - that is the basis of modern man's nuclear family, and asks why the first signs of humanity occurred a mere 15,000 years ago in the cave paintings of Lascaux. What was going on in the minds of men before that first recorded expression of art and humanity occurred? Richard Leakey also wrote People of the Lake and The Making of Mankind . Roger Lewin is also the author of the prize-winning Bones of Contention.

Anyone with curiosity will find a reason to read Origins Reconsidered: it is a superb account of the state of knowledge concerning the evolution of our species . . .Richard Leakey sees the wood and not just the trees (NEW SCIENTIST)

1. Origins Reconsidered: In Search of What Makes Us Human