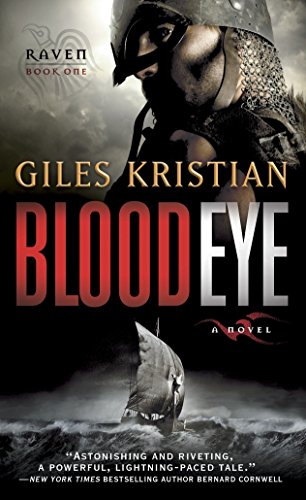 In a thrilling adventure of brotherhood, warfare, and treachery, Giles Kristian takes us into ninth-century England, a world of darkness, epic conflict, and an unforgiving God served by powerful priests. On ships shaped like dragons, bristling with oars and armor, Jarl Sigurd and his fierce Norsemen have come in search of riches. And riches they are promised, by an English ruler who sends Sigurd and his wolves to steal a holy manuscript from another kingdom. Osric, an orphan boy, sees beyond the terror of these warriors, and somehow knows the heathens' tongue. Renamed Raven, rechristened in blood, he will join them. They are his people. And they will be his fate.

"A gripping tale that splendidly conjures up the sounds, sights and smells of Dark Age Britain."--Harry Sidebottom, author of the Warriors of Rome series

"A powerful, lightning-paced tale of the Norsemen in England; an astonishing and riveting debut."
-- Bernard Cornwell

In A.D. 793 a flotilla of sleek longships sailed out of a storm and onto the windswept beach at the Holy Island of Lindesfarne, off England's north-east coast. The marauders who leapt from these grim-prowed craft sacked the monastery there, slaughtering its monks in what was seen as a strike against civilization itself. This event marks the dawn of the Viking age, an age in which adventurous, ambitious heathens surged from their Scandinavian homelands to raid and trade along the coasts of Europe. Fellowships of warriors, bound by honour and wanderlust, would reach as far as Newfoundland and Baghdad, the sword-song of their battles ringing out in Africa and the Arctic. They were nobles and outcasts, pirates, pioneers and great seafarers. They were the Norsemen.

Being half Norwegian and spending so much time in the fjords, I have always known I would write a Viking novel. As a child, I would look out across the water, letting my imagination summon the image of a dragon-prowed longboat rowed by grizzled, bearded men. I could, if I really concentrated, hear the sound of oars dipping in unison into the sea. I still do it even now! I imagine families standing on the smooth rocks of the shore, waving their menfolk off. I feel the fear knotting in the men's stomachs as they set off in open boats across the North Sea. I feel the prickle excitement beneath my skin.

In the summer of 2004 I scribbled down the first words: 'I do not know where I was born. When I was young, I would sometimes dream of great rock walls rising from the sea so high that the sun's warmth never hit the cold, black water....I know nothing of my childhood, of my parents, or if I had brothers and sisters. I do not even know my birth name.' I think this opening was a deliberate attempt to venture beyond my own reality, seeing as I come from a very close, firmly-rooted family. Osric (later Raven) is shunned by society because he is different. He is an outcast. My life may be a little unconventional, but I would like to think I am not entirely outcast!
Much about the novel changed over the two years of writing, but those opening lines made it all the way, and I'm glad about that.
From then on, I just tried to write the sort of book I would want to read, full of battles and adventure, but one which also delves into the mind of a young man thrust into a strange new world. I hope I have succeeded. The book was certainly a lot of fun to write.
Giles Kristian.