Items related to Into the Storm: 10 (Troubleshooters)

Suzanne Brockmann Into the Storm: 10 (Troubleshooters)

Into the Storm: 10 (Troubleshooters) 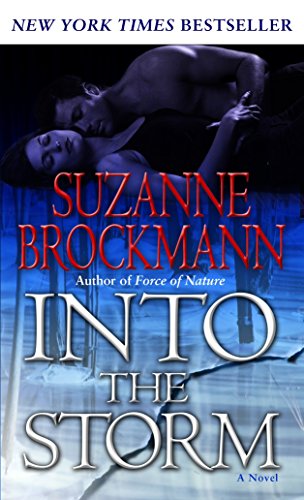 Bestselling author Suzanne Brockmann blends high adventure, harrowing drama, and heart-racing passion into thrilling novels of suspense. Whether tackling danger or wrestling with desire, her elite heroes and heroines never fail to give their all, in stories that soar above and beyond expectations. Now, in this electrifying novel, Brockmann takes us Into the Storm.

In a remote, frozen corner of New Hampshire, a Navy SEAL team and the elite security experts of Troubleshooters, Incorporated are going head-to-head as fierce but friendly rivals in a raid-and-rescue training exercise. Despite the frigid winter temperatures, tension smolders between veteran SEAL Petty Officer Mark "Jenk" Jenkins and former cop turned Troubleshooter Lindsey Fontaine after an impulsive night goes awry. And then, suddenly, Tracy Shapiro, the Troubleshooters' new receptionist, vanishes while playing the role of hostage during a mock rescue operation. Teaming up with the FBI to launch a manhunt in the treacherous wilderness, Jenk and Lindsey must put aside their feelings as a record snowstorm approaches, dramatically reducing any hope of finding Tracy alive. The trail is colder than the biting New England climate until a lucky break leads to a horrifying discovery- a brutally murdered young woman wearing the jacket Tracy wore when she disappeared. Suddenly there is a chilling certainty that Tracy has fallen prey to a serial killer- one who knows the backwoods terrain and who doesn't play by the rules of engagement. In a race against time, a raging blizzard, and a cunning opponent, Jenk and Lindsey are put to the ultimate test. Rising everything, they must finally come together in a desperate attempt to save Tracy-and each other.

Breaking Point "[An] adrenaline-rich tale of suspense . . . With its realistically complex and conflicted characters, intense sexual tension, and edgy humor, this is Suzanne Brockmann at her best."
-Booklist "An action-packed breathtaking thriller."
-Romantic Times (Top Pick!) Hot Target "[A] fast-paced thriller . . . edgy, exceptional . . . brava!"
-Library Journal (starred review) "[An] intense thriller . . . an emotional banquet served with lots of taut adventure."
-Romantic Times Gone Too Far "Sizzling with military intrigue and sexual tension, with characters so vivid they leap right off the page, Gone Too Far is a bold, brassy read with a momentum that just doesn't quit."
-Tess Gerritsen Into the Night "She skillfully builds suspense. . . . With its complicated, complex characters and a sexy romance seasoned with humor and danger, Brockmann's [novel] is absolutely irresistible."
-Booklist (boxed and starred review) Out of Control "Brockmann consistently turns out first-rate novels that tug on the reader's heartstrings, and her latest is no exception."
-Publishers Weekly Over the Edge "A taut, edgy thriller."
-Linda Howard About the Author:

After childhood plans to become the captain of a starship didn't pan out, Suzanne Brockmann took her fascination with military history, her respect for the men and women who serve, her reverence for diversity, and her love of storytelling and explored brave new worlds as a New York Times bestselling romance author. Over the past twenty years, she has written more than fifty novels, including her award-winning Troubleshooters series about Navy SEAL heroes and the women--and sometimes men--who win their hearts. In addition to writing books, Suzanne Brockmann has co-produced a feature-length movie, the award-winning romantic comedy The Perfect Wedding, which she co-wrote with her husband, Ed Gaffney, and their son, Jason. She has also co-written a YA novel, set in the world of her paranormal Fighting Destiny series, with her daughter, Melanie. Find Suzanne Brockmann on Facebook, follow her on Twitter, and visit her website to find out more about upcoming releases and appearances.

1. Into the Storm (Troubleshooters, Book 10)

3. INTO THE STORM (TROUBLESHOOTERS,