Items related to The Secret of the Sword (Sword of Shannara)

Brooks, Terry The Secret of the Sword (Sword of Shannara)

The Secret of the Sword (Sword of Shannara) 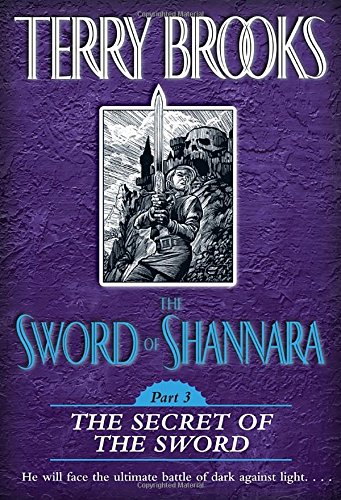 He will face the ultimate battle of dark against light. . . .
The flame of hope is flickering throughout the Four Lands. But thanks to Brona, the evil Warlock Lord, a cloud of dark magic is sweeping south, spreading fear and death. Already Brona’s savage armies have crushed the forces of the Elves and their king. Now nothing stands between them and the fair city of Tyrsis. And if Tyrsis falls, the whole Southland will follow, plunged into an endless night of slavery and worse.

The Druid Allanon has dispatched Menion, the Prince of Leah, to aid in the defense of Tyrsis while he himself continues to search for Shea Ohmsford, the young half-elf who bears the awesome burden of wielding the only weapon capable of destroying Brona: the mysterious Sword of Shannara. Yet magic of the fabled weapon makes it as dangerous to Shea as it is to the Warlock Lord. Now, in the very heart of the Dark Lord’s domain, Shea is about to unlock the deadly secret of the Sword–and come face to face with his destiny. . . .

The Sword of Shannara Part 3: The Secret of the Sword is the newest addition to the Del Rey Imagine program, which offers the best in classic fantasy and science fiction for readers 12 and up.

Terry Brooks published his first novel, The Sword of Shannara, in 1977. It was aNew York Times bestseller for more than five months. He has published eighteen consecutive bestsellers since, including his newest novel:The Voyage of the Jerle Shannara: Morgawr. His novels Running with the Demon andA Knight of the Word were each selected by the Rocky Mountain News as one of the best science fiction/fantasy novels of the twentieth century. Brooks lives with his wife, Judine, in the Pacific Northwest and Hawaii.

Visit us online at www.shannara.com.

1. The Sword of Shannara: The Secret of the Sword