Items related to Decision at Doona: A Novel: 1

Decision at Doona: A Novel: 1 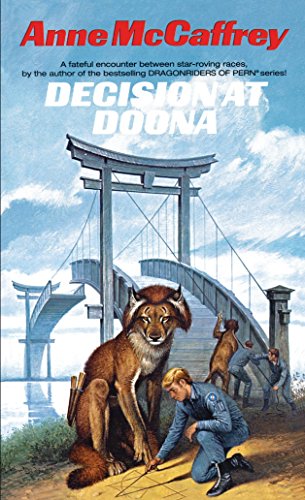 A fateful encounter between star-roving races by the author of the bestselling Dragonriders of Pern series!

After the first human contact with the Siwannese, that entire race committed mass suicide. So the Terran government made a law—no further contact would be allowed with sentient creatures anywhere in the galaxy. Therefore Doona could be colonized only if an official survey established that the planet was both habitable and uninhabited.

But Spaceship had made a mistake—Doona was inhabited. Now the colonists' choice was limited. Leave Doona and return to the teeming hell of an overpopulated Terra. Or kill the catlike Hrrubans. Or learn, for the first time in history, how to coexist with an alien race.

Anne McCaffrey, one of the world’s most popular authors, is best known for her Dragonriders of Pern® series. She was the first woman to win the two top prizes for science fiction writing, the Hugo and Nebula awards. She was also given the American Library Association’s Margaret A. Edwards Award for Lifetime Literary Achievement in Young Adult Fiction, was inducted into the Science Fiction Hall of Fame, and was named a Science Fiction Writers of America Nebula Grand Master. Born in Cambridge, Massachusetts, in 1926, McCaffrey relocated to Ireland in the 1970s, where she lived in a house of her own design, named Dragonhold-Underhill. She died in 2011.

1. Decision at Doona: A Novel

2. Decision at Doona: A Novel

3. DECISION AT DOONA: A NOVEL