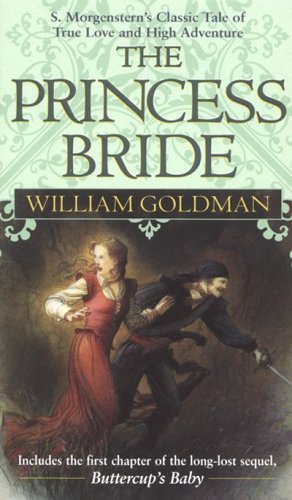 A a classic fairy tale romance retells the tale of a drunken swordsman and a gentle giant who come to the aid of Westley, a handsome farm boy, and Buttercup, a princess in dire need of rescue from the evil schemers surrounding her. Reissue

First published well, in 1973 actually, this book spawned the Rob Reiner-directed cult film of the same name. It's a tongue-in-cheek fairytale of love, life, action, death and life again. Featuring the obligatory handsome Prince and supremely beautiful princess, it also boasts a Spanish sword wizard, the Zoo of Death, a chocolate-coated resurrection pill and lots of villains, who span the spectrum from evil, through even more evil to (gasp) most evil. And then there's Fezzik, the gentle giant addicted to rhyming.

William Goldman--who's won two Oscars for his screenwriting (Butch Cassidy and the Sundance Kid and All the President's Men), and has endeared himself to dentists and their patients planetwide through his novel Marathon Man--has always claimed he merely abridged this text, extracting the "good parts" from an inventive yet wordy classic by Florinese literary superstar, S Morgenstern.

It has, however, been whispered in certain circles that Morgenstern himself is a figment of Goldman's ultra-fertile imagination. Read Goldman's original and special Anniversary introductions and make up your own mind. Oh--and don't forget his explanation as to why he's only "abridged" the first chapter of the sequel Buttercup's Baby--which appears here for the first time--and why it took him so long to get round to it.

`A swash-buckling comic fantasy fairytale adventure ... my favourite book in all the world'
-- The Princess Bride - William Goldman