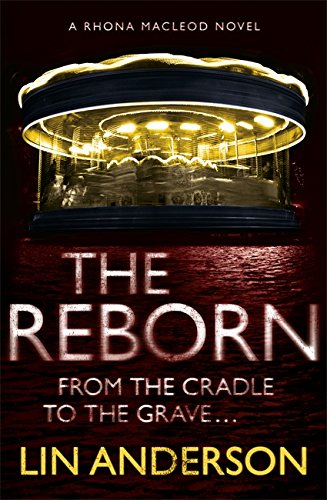 The clown suddenly appeared beside a group of kids at the candy floss van, bringing Kira to an abrupt halt. Then it began. The rapid heartbeat, the burst of perspiration, the gasping breath. The baby lurched inside her, as though sharing her panic.

When the body of a pregnant teenager is found in a Hall of Mirrors with the full-term foetus surgically removed, forensic scientist Rhona MacLeod is called in to assist the police. Suspicion falls on Jeff Coulter, a psychotic inmate at a nearby hospital whose hobby is making Reborns - chillingly realistic baby dolls intended for bereaved parents or those unable to conceive. But how could he have orchestrated the murder from a secure mental facility?

The investigation leads to a group of teenage girls who seem to have all got pregnant at the same time. Then a Reborn doll is discovered near the crime scene and a second girl from the group is found dead..

Creepy, compelling and heart-stoppingly tense, THE REBORN is Lin Anderson's most powerful novel yet.

definitely a cut above the average: vivid and atmospheric (Guardian on EASY KILL)

Lin Anderson is one of Scotland's national treasures; don't be fooled by comparisons, her writing is unique, bringing warmth and depth to even the seediest parts of Glasgow. Lin's Rhona MacLeod is a complex and compelling heroine who just gets better with every outing. (Stuart MacBride, author of Cold Granite and Dying Light)

Lin's books are like 'CSI: Glasgow', combining forensic investigation with the breakneck pace of a thriller.

Book Description Hodder & Stoughton Ltd, 2010. Condition: Good. Ships from the UK. Shows some signs of wear, and may have some markings on the inside. Seller Inventory # GRP119049478