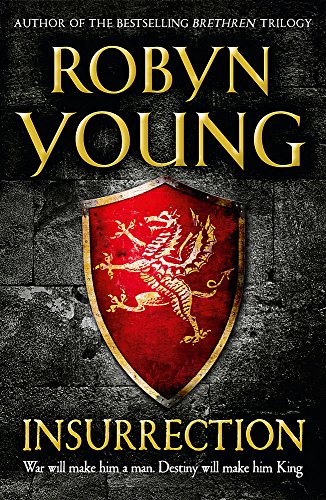 The first book in the Insurrection trilogy, which tells the thrilling story of Robert the Bruce.

1286 A.D. Scotland is in the grip of the worst winter in living memory. Some say the Day of Judgement has arrived.

The King of Scotland rides out from Edinburgh into the stormy night. On the road he is murdered by one of his own men, leaving the succession to the throne wide open. Civil war threatens as the powerful Scottish families jostle for power, not knowing that King Edward I of England has set his own plans for conquest in motion.

But all is not destined to go Edward's way. Through the ashes of war, through blood feuds and divided loyalties, a young squire will rise to defy England's greatest king. His name is Robert Bruce.

Insurrection is the first in an addictive and action-packed trilogy in the tradition of Conn Iggulden, Bernard Cornwell and Manda Scott.

It is so graphic you can immediately put yourself there, imagining the faces and the clash of weapons. It also elaborates on the historical context and fleshes out the characters. It draws you in and is a compelling novel you cannot put down. So much research must have gone into the book; the detail is incredible. I enjoyed it so much. (The BBC Radio 2 Simon Mayo Book Club)

This is a big book, and the trilogy a huge project to undertake. From the evidence so far, Young's fans will not be disappointed as she meticulously ploughs through the sweep of history and brings to life one of its most enigmatic characters (Daily Mail)

Action-packed historical novel about Robert The Bruce. A fighting start to a new trilogy. (Sun)

Where Game of Thrones sets kingdoms at war within a fantasy world, the Insurrection trilogy is based on the breath-taking true story of Robert the Bruce's battle to become king.

Book Description 2011. Paperback. Condition: New. Paperback. 1262 A.D.In the dusty heat of French fields, knights battle for supremacy in a fierce tournament. At its violent heart is Edward of England, who leads his men under the banner of the drago.Shipping may be from multiple locations in the US or from the UK, depending on stock availability. 672 pages. 0.440. Seller Inventory # 9780340963661

Book Description 2011. Paperback. Condition: New. Paperback. 1262 A.D.In the dusty heat of French fields, knights battle for supremacy in a fierce tournament. At its violent heart is Edward of England, who leads his men under the banner.Shipping may be from our Sydney, NSW warehouse or from our UK or US warehouse, depending on stock availability. 672 pages. 0.440. Seller Inventory # 9780340963661