Items related to Mad, Bad and Dangerous to Know

Mad, Bad and Dangerous to Know 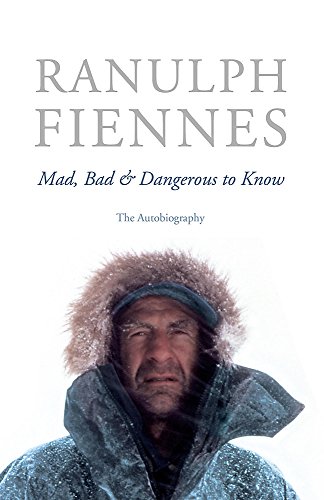 Ranulph Fiennes has travelled to the most dangerous and inaccessible places on earth, almost died countless times, lost nearly half his fingers to frostbite, raised millions of pounds for charity and been awarded a polar medal and an OBE. He has been an elite soldier, an athlete, a mountaineer, an explorer, a bestselling author and nearly replaced Sean Connery as James Bond. In his autobiography he describes how he led expeditions all over the world and became the first person to travel to both poles on land. He tells of how he discovered the lost city of Ubar in Oman and attempted to walk solo and unsupported to the South Pole - the expedition that cost him several fingers, and very nearly his life. His latest challenge is to climb the north face of the Eiger, one of the most feared mountaineering feats in the world, which he will describe in a gripping final chapter.

In this fascinating book Sir Ranulph Twistleton-Wickham-Fiennes OBE, 3rd Baronet, looks back on a life lived at the very limits of human endeavour.

Acclaim for CAPTAIN SCOTT: 'No-one is better placed than Fiennes to understand what Scott may have experienced or to appreciate the enormity of his achievement. A gripping tale of courage and adventure.' (Daily Mail)

A valuable corrective . . . One by one, and with commendable attention to detail, Fiennes explodes the accumulated myths. The world will remember Scott and, to a lesser extent, Fiennes when the memory of the mean-spirited and misleading Huntford has long since melted away. (Justin Marozzi, Sunday Telegraph)

He is uniquely qualified . . . because only someone who has "man-hauled" across Antarctica can know what went on. Fiennes's own experiences certainly allow him to write vividly and with empathy of the hell that the men went through. He has valuable insights into the running of the Royal Geographical Society and the mounting of an expedition, and he does indeed right some wrongs. (The Sunday Times)