Items related to Starter For Ten 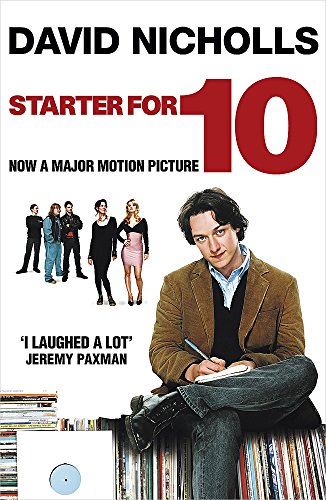 The debut bestseller from the author of the phenomenally successfully ONE DAY and Man Booker longlisted US. STARTER FOR TEN is a comedy about love, class, growing-up and the all-important difference between knowledge and wisdom.

It's 1985 and Brian Jackson has arrived at university with a burning ambition - to make it onto TV's foremost general knowledge quiz. But no sooner has he embarked on 'The Challenge' than he finds himself falling hopelessly in love with his teammate, the beautiful and charismatic would-be actress, Alice Harbinson.

When Alice fails to fall for his slightly over-eager charms, Brian comes up with a foolproof plan to capture her heart once and for all. He's going to win the game, at any cost, because - after all - everyone knows that what a woman really wants from a man is a comprehensive grasp of general knowledge . . .

STARTER FOR TEN is a comedy about love, class, growing-up and the all-important difference between knowledge and wisdom. Are you up to the challenge of the funniest novel in years?

Is David Nicholls' Starter for Ten a throwback? Many readers look back with nostalgia to a recent golden age of comic writing, when David Lodge, Malcolm Bradbury and Tom Sharpe were producing some achingly funny work, with brilliantly realised characters. But Nicholls' sharp-as-nails novel has all the comic acumen of his great predecessors (along with their frequently-utilised university campus milieu) and, like Lodge and co., Nicholls writes real characters, not just boobies suitable only for pratfalls and sexual embarrassment. So even though the situations may often be ridiculous, we're still engaged by the protagonists.

Here, they are university student Brian Jackson and aspiring actress Alice Harbinson. Brian has arrived at his place of learning with a stronger desire than the acquisition of knowledge: he's going to be a star of TV's hottest quiz. But his progress on "The Challenge" is somewhat stymied by his growing desire for the beguiling Alice, struggling to make her mark as an actress. And as obstacles impede their affair, Brian becomes more and more convinced that only overwhelming success on the quiz show will win her.

What makes this novel such a delight, apart from the strongly drawn characters (both major and minor) is the coruscating dialogue: Nicholls writes comic dialogue like a dream, and his targets are many and varied: the idiocies of love and sex, the ludicrous pursuit of meaningless TV celebrity, fat cat businessmen lining their pockets--you name it, and it's probably here; Starter for Ten is a panoply of modern Britain with all its glories and excesses writ large. Nicholls wrote the third series of the hit TV series Cold Feet, which is as good a demonstration of his credentials as one could wish for. But Starter for Ten is his best work; there are no false notes struck by miscast actors, just prose that has a comic energy not often encountered these days. --Barry Forshaw

Starter for Ten is the debut of the year; a recommendation repeated by all who come in contact with it ... Trust us, you'll love it (Arena)

Nicholls' portrayal of student affectations is accurate and funny ... clever and well-written (Independent)

Brilliant... we would recommend it to anyone (Richard Madeley and Judy Finnigan)