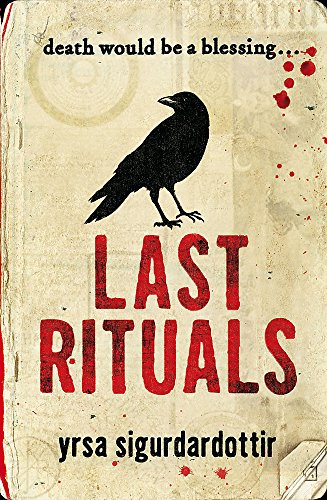 'Yrsa is one of the most exciting new voices in the crime thriller world.' - Peter James

A young man is found brutally murdered, his eyes gouged out. A student of Icelandic history in Reykjavik, he came from a wealthy German family who do not share the police's belief that his drug dealer murdered him. Attorney Thora Gudmundsdottir is commissioned by his mother to find out the truth, with the help - and hindrance - of boorish ex-policeman Matthew Reich. Their investigations into his research take them deep into a grisly world of torture and witchcraft both past and present, as they draw ever closer to a killer gripped by a dangerous obsession...

I can see why so many people are enthusiastic about Yrsa's work. It's very engaging, fresh and exciting. (James Patterson)

A grisly chiller set in the depths of winter ... Her mystery is absorbing and, untypically, instead of the usual gloomy middle-aged man, her sleuth is a young woman ... It's an accomplished debut, with credible characters and a personable heroine. (Sunday Telegraph)

Dark, deep and icy as an Icelandic fjord; this is a rich and rewarding debut novel of ancient mysteries and very modern murder. (Mark Billingham)

An intricately plotted tale that keeps the reader guessing whodunit, or indeed whether it was murder at all, right until the very end. (Sunday Express)

A grisly, chilling Icelandic thriller from a fantastic new voice in crime fiction.

Book Description Hodder & Stoughton, 2008. Hardcover. Condition: Good. Ex-Library Book. Has usual library markings and stamps inside. All orders are dispatched the following working day from our UK warehouse. Established in 2004, we have over 500,000 books in stock. No quibble refund if not completely satisfied. Seller Inventory # mon0004896574

Book Description Hodder & Stoughton Ltd, 2008. Hardcover. Condition: Good. Item may show signs of shelf wear. Pages may include limited notes and highlighting. May include supplemental or companion materials if applicable. Access codes may or may not work. Connecting readers since 1972. Customer service is our top priority. Seller Inventory # mon0001784765

Book Description -. Hardcover. Condition: Very Good. Last Rituals: Thora Gudmundsdottir Book 1 This book is in very good condition and will be shipped within 24 hours of ordering. The cover may have some limited signs of wear but the pages are clean, intact and the spine remains undamaged. This book has clearly been well maintained and looked after thus far. Money back guarantee if you are not satisfied. See all our books here, order more than 1 book and get discounted shipping. Seller Inventory # 7719-9780340920602

Book Description Hardback. Condition: Very Good. The book has been read, but is in excellent condition. Pages are intact and not marred by notes or highlighting. The spine remains undamaged. Seller Inventory # GOR002107976

Book Description Hardback. Condition: Good. The book has been read but remains in clean condition. All pages are intact and the cover is intact. Some minor wear to the spine. Seller Inventory # GOR004218814

Book Description Hodder & Stoughton, 2008. Hardcover. Condition: Good. Neat dedication on the opening page Good condition is defined as: a copy that has been read but remains in clean condition. All of the pages are intact and the cover is intact and the spine may show signs of wear. The book may have minor markings which are not specifically mentioned. Most items will be dispatched the same or the next working day. Seller Inventory # wbb0014211829

Book Description Hodder & Stoughton, London, 2008. Hardcover. Condition: Near Fine. Dust Jacket Condition: Fine. First Edition. This is a Near Fine Copy of this Book in black cloth with red title lettering to spine in a Fine Dust-Jacket that has with NO chips or tears to the outer edges of the wrapper.Not price clipped and with price of (Ł19.99 showing to inner flap) This copy has NO previous owner's names or inscriptions present but has been Signed by the Author on the Title Page.The book has a firm binding with no hinge weakness and with no leaning to spine.There are no loose pages and the text is clean internally apart from some yellowing marks to the title page and it's verso page.The dust-jacket comes well protected in a removable cover sleeve,8vo 423pp First UK Edition 1st Impression [2008]. Signed by Author(s). Seller Inventory # 77956