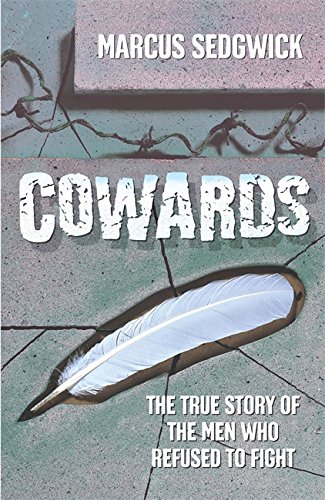 A sealed train speeds through the night around the outskirts of wartime London. As it passes through a dimly-lit station without stopping, a note is thrown out on to the platform. What is happening to the men on board? Why do they have to resort to such a desperate method of contacting their loved ones?

This is the story of Howard Marten and Alfred Evans, two young men who refused to join the army in the First World War. They suffered imprisonment and punishment, because they believed it was wrong to kill. Sent to the front line in France, they were told to obey or face the firing squad.

But they escaped execution, and were sent to jail instead. The 'conchies' had achieved a victory, of sorts. The government at last acknowledged the right of men like Marten and Evans to refuse to fight.

...it has clear relevance to the debate raging amongst Britain's young people about the nature of war...a fascinating and accessible piece of social and military history. (The Guardian)

Shows this much written about war in a new light for many young readers, while the production and style may appeal to those hard-to-interest teenage boys. (Highlights of the Season, Children's Buyers Guide:)

...Sedgwick allows events their true depth and immediacy by refusing to moralise from hindsight. (The Daily Telegraph)

World War I is a strong, popular theme in the trade and in schools.

Book Description Paperback. Condition: Very Good. The book has been read, but is in excellent condition. Pages are intact and not marred by notes or highlighting. The spine remains undamaged. Seller Inventory # GOR001497162

Book Description -. Paperback. Condition: Very Good. Cowards (Literary Non-Fiction) This book is in very good condition and will be shipped within 24 hours of ordering. The cover may have some limited signs of wear but the pages are clean, intact and the spine remains undamaged. This book has clearly been well maintained and looked after thus far. Money back guarantee if you are not satisfied. See all our books here, order more than 1 book and get discounted shipping. Seller Inventory # 7719-9780340860618

Book Description Hodder Children's Books 13/03/2003, 2003. Condition: Very Good. Shipped within 24 hours from our UK warehouse. Clean, undamaged book with no damage to pages and minimal wear to the cover. Spine still tight, in very good condition. Remember if you are not happy, you are covered by our 100% money back guarantee. Seller Inventory # 6545-9780340860618

Book Description Hodder Children's Books, 2003. Paperback. Condition: Used; Good. **Simply Brit** Shipped with Premium postal service within 24 hours from the UK with impressive delivery time. We have dispatched from our book depository; items of good condition to over ten million satisfied customers worldwide. We are committed to providing you with reliable and efficient service at all times. Seller Inventory # mon0000212863

Book Description Hodder Children's Books, 2003. Paperback. Condition: Used; Good. Personal Inscription on First Page **SHIPPED FROM UK** We believe you will be completely satisfied with our quick and reliable service. All orders are dispatched as swiftly as possible! Buy with confidence! Aloysius Ihezie. Seller Inventory # 3579701