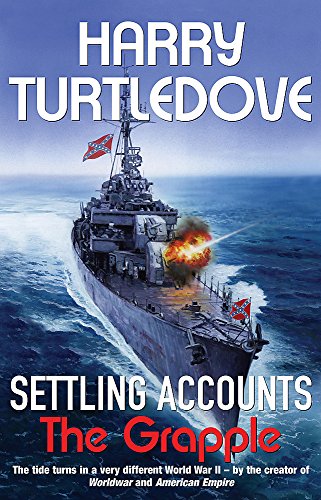 The United States have found their fighting form at last. Pushed back from Pittsburgh, by 1944 the Confederate States of America are struggling to hold their ground against an American army that seems to grow stronger by the day. While the United States press on towards the Mississippi valley, Jake Featherston's strategists in Richmond look for some way - any way - to slow down their inexorable advance. Deep in the heartland the extermination camps continue, but when all hope seems lost for their victims, the United States army turns at last towards the Texas plains. The fate of both sides, though, may lay elsewhere. A new menace appears in the Atlantic, intent on attacking the United States and scientists on both sides of the rapidly-moving border have nearly perfected an awesome new weapon that will guarantee victory for whoever uses it first. The greatest war of the twentieth century - fought this time in the heart of America - moves towards its blood-soaked climax.

With shocking vividness, Turtledove demonstrates the extreme fragility of our modern world ... This is state-of-the-art alternate history, nothing less (Publishers Weekly (starred review for HOW FEW REMAIN))

Turtledove's books are always great entertainment but in all these novels about an alternate North America the possible route of democracy, demagoguery and repression ring all too true . . . the power of the book is in its ordinary people and their struggles. (SFX Magazine on SETTLING ACCOUNTS: RETURN ENGAGEMENT)

Engrossing . . . definitely the work of one of alternate history's authentic modern masters ... totally fascinating. (Booklist on THE GREAT WAR series)

Harry Turtledove has lived in Southern California all his life. With a Ph.D. in history from the University of California, he has taught at UCLA, California State Fullerton and California State University, Los Angeles. He has written many works of speculative fiction and fantasy. He is married to the novelist Laura Frankos and they have three daughters.