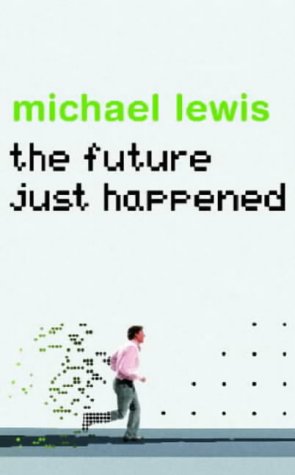 The basis of a four-part prime-time BBC series, Michael Lewis' new book explores how digital technology, and the internet in particular, has changed the way we live. He argues that not only does our generation now have the easiest access to more information than ever before, but more importantly this has changed our attitudes to how we run our lives. In his inimitable, amusing style, bestselling author Michael Lewis has written a marvellously accessible portrait of modern times.

Michael Lewis' The Future Just Happened is for readers who have ever had the sneaking suspicion that the Internet is radically changing the world as you know it. Buckle up--it is. While some people celebrate this and others bemoan it, Lewis has been busy investigating the reasons for this rapid change. Employing the keen recognition of social shifts and the sarcastic wit that readers of Liar's Poker and The New New Thing will be familiar with, Lewis takes us on a quick spin through tomorrow and speculates on what that might mean for today.

Central to Lewis' observations is the idea that the Internet hasn't really caused anything; rather it fills a type of social hole, the most obvious of which, according to Lewis, is a need to alter relations between "insiders" and "outsiders". In The Future Just Happened, Lewis shows how the Internet is the ideal demonstration model for the sociologists who believe that our "selves are merely the masks we wear in response to the social situations in which we find ourselves". It is the place where a New Jersey boy barely into his teens flouts the investment system, making big enough bucks to get the SEC breathing down his back for stock market fraud. Where Markus, a bored adolescent stuck in a dusty desert town and too young to even drive, becomes the number 1 requested legal expert on Askme.com, doling out advice on everything from how to plead to murder charges to how much an Illinois resident can profit from illegal gains before being charged with fraud ($5001. was the figure Markus supplied to this particular cost-benefit analysis query). Where a left-leaning kid of 14 in a depressed town outside Manchester is too poor to take up a partial scholarship to a school for gifted children but who spends all hours (all cheap call-time hours, at least) engaged in "digital socialism", and trying to develop a successor to Gnutella, the notorious file-sharing program that had spawned the new field of Peer to Peer Computing. Lewis burrows deeply into each of these stories and others, pulling out and examining what he notices as a number of key social factors the Internet has contributed to: the redistribution of prestige and authority and the reversal of the social order, the erosive effect on the money culture (both in the democratisation of capital and in the effect of gambling losing its "status as a sin"), the decreased value we place on formal training (or as he puts it "casual thought went well with casual dress") and the increased need for knowledge exchange.

Lewis' observations are piercingly sharp. He can be very funny in his portrayal of the way in which ordinary people are enacting the changes the Internet is facilitating in society, but remains thorough and insightful in his examination of the social consequences of these changes. He notes that Jonathan Lebed, the teenage online investor, had "glimpsed the essential truth of the market--that even people who called themselves professionals were often incapable of independent thought and that most people, though obsessed with money, had little ability to make decisions about it" and then relays the subtly revealing account of mistaken identity during his own interview with the director of the SEC. While his commentary gets a little more dense and theoretical toward the end, Lewis' book is an entertaining, thought-provoking look at life in an Internet-driven world. -- S. Ketchum

Readable and entertaining ... a curiosity shop of comic encounters threaded by social observation (Independent on Sunday)

Lewis has an immense talent for the telling of tales... these are absorbing exercises in higher journalism, entertaining and disturbing in equal measure (Observer)

Warmly recommended, especially to those liable to disagree with it (The Sunday Times)

Witty insights into teen technophiles who have made the net their own and changed the world in ways that adults can only boggle at. (The Sunday Times)

Praise for THE NEW NEW THING: 'You cannot help trusting Lewis. Sometimes maniacally funny, sometimes mournful, this is a fascinating journey into the Wild West of American capitalism' (Daily Telegraph)

Praise for THE NEW NEW THING: 'If you want to understand the phenomenon that was California's Silicon Valley in the 1990s, you won't find a better book that this ... hugely enjoyable' (Charles Handy)

Praise for THE NEW NEW THING: 'A splendid, entirely satisfying book, intelligent and fun and revealing and troubling in the correct proportions, resolutely skeptical but not at all cynical, brimming with fabulous scenes as well as sharp analysis' (New York Times)

4. NEXT: THE FUTURE JUST HAPPENED