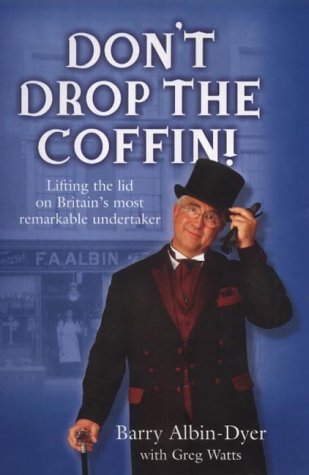 Don't Drop the Coffini tells the story of Barry Albin-Dyer, who runs one of the UK's oldest family firms of funeral directors, in Rotherhithe, South London. At times funny, at times bizarre, at times moving, this is a rare insight into the profession of death. We learn about cryonics, gangland funerals, removing bodies from suicide and murder scenes, eccentric morticians, spooky happenings, fights in cemeteries and countless other remarkable incidents. In the life of this undertaker truth really does seem stranger than fiction. As well as explaining the tricks of his trade Barry, a Roman Catholic convert, ponders the meaning of death, the afterlife and the process of grieving, and refutes the claim that funeral directors prey on the vulnerable.

Barry Albin-Dyer owns F. A. Albin & Sons in Bermondsey, South London, one of Britain's largest and oldest family firms of funeral directors. He is now one of the UK's best-known undertakers and is consulted on and conducts some of the most high-profile funerals in the country. He is also the sole European agent for Detroit's controversial Cryonics Institute.

Book Description Hodder & Stoughton Ltd, 2002. Hardcover. Condition: Good. Previous owners name inside the front page Good condition is defined as: a copy that has been read but remains in clean condition. All of the pages are intact and the cover is intact and the spine may show signs of wear. The book may have minor markings which are not specifically mentioned. Most items will be dispatched the same or the next working day. Seller Inventory # wbb0014136291

Book Description -. Hardcover. Condition: Very Good. Don't Drop the Coffin! This book is in very good condition and will be shipped within 24 hours of ordering. The cover may have some limited signs of wear but the pages are clean, intact and the spine remains undamaged. This book has clearly been well maintained and looked after thus far. Money back guarantee if you are not satisfied. See all our books here, order more than 1 book and get discounted shipping. Seller Inventory # 7719-9780340786642

Book Description Hodder & Stoughton Ltd 18/04/2002, 2002. Hardcover. Condition: Very Good. Shipped within 24 hours from our UK warehouse. Clean, undamaged book with no damage to pages and minimal wear to the cover. Spine still tight, in very good condition. Remember if you are not happy, you are covered by our 100% money back guarantee. Seller Inventory # 6545-9780340786642