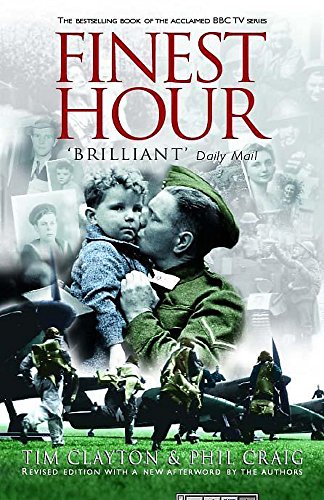 This powerful and incisive account of the events of 1940, told through the voices, diaries, letters and memoirs of the men and women who survived it - and those who lost their lives - provides fascinating and often controversial new insights into the conflicts and the politics of the period. Finest Hour tells the story of how Britain's darkest hour eventually became its finest.

' Craig digs beneath the time-worn legend of stiff-upper-lip English pluckiness to show a far more complex, more human and more moving picture of the human spirit under stress. An intriguing collection of Britons, rich and poor, give vivid, wonderfully told examples of cowardice becoming valor, of shrapnel-swapping among blitz-happy schoolboys, of a summer of exceptional natural beauty and obscenely unnatural death ... The BBC have ... rarely produced any finer hours than these.' - Washington Post

A defeated, retreating British Expeditionary Force, the miraculous evacuation at Dunkirk, the Battle of Britain, the evacuation to America and the Blitz. You couldn't make the story of 1940 dull if you tried. But even the best material has to be threaded into a manageable narrative and Tim Clayton and Phil Craig don't disappoint. Finest Hour is never less than engaging and frequently does rather better. On the jacket blurb, Clayton and Craig seem keen to establish their bona fides as heavyweight historians and claim to have uncovered a "fresh and controversial" account of the political intrigues and betrayals of the period. There's actually nothing really controversial on offer--at least nothing that hasn't been aired elsewhere. If this comes as a disappointment to the authors, it need not to the reader because we are left with something just as, if not more, valuable, namely an accessible layperson's ride through the political and military manoeuvrings. Clayton and Craig are particularly good at guiding us through the early days of Churchill's premiership. Read most populist accounts and you would imagine that the moment Churchill took office the bulldog spirit took over and the plucky Brits stood resolute. Not so. The case for appeasement was still being made within the Cabinet up until the evacuation of Dunkirk, as Lord Halifax had a great deal of support for his conciliatory views. Bizarrely, the thing that ultimately counted against him was his title as it was felt the Upper House should not hold sway over the Commons. Where this book excels, though, is in the quality of its eyewitness testimonies. Many books have previously used this technique of threading narrative with the first person but few have found such eloquent speakers. Most eyewitnesses fudge the difficult bits with remarks like, "It was hell". Clayton and Craig's witnesses don't pull their punches. We hear of one Brit who shot a German officer in cold blood and had nightmares for ages afterwards. We hear of the sailor who saw his gunner decapitated. We experience the stench of burnt flesh following the shelling of an ambulance. In short, we are spared nothing. It may not be comfortable reading but you can't ignore it. 60 years after the men and women in these pages fought and died, there's a tendency for the rest of us to take the freedom they gave us for granted. They deserve a better memorial than a slow fading into nothingness. This book ensures they get it. --John Crace

Manages to construct the tale in such a way that it breaks free of the text-book approach to transfix the viewer completely; the archive footage, the witness testimonies ...of such superior quality and so beautifully shot that the whole is fresh and absorbing ... Compiled with a pace that could put a lot of thrillers to shame, the result is television at its very best. (Time Out)

From fighter-pilots risking their lives in the skies above England, to squaddies stranded at Dunkirk, to schoolgirls sent abroad to Canada (the book is worth buying just for Bess Walder's account of horror and redemption aboard the City of Benares), this is riveting. (Sunday Express)

But Craig digs beneath the time-worn legend of stiff-upper-lip English pluckiness to show a far more complex, more human and more moving picture of the human spirit under stress. An intriguing collection of Britons, rich and poor, give vivid, wonderfully told examples of cowardice becoming valor, of shrapnel-swapping among blitz-happy schoolboys, of a summer of exceptional natural beauty and obscenely unnatural death ... WGBH Boston and the BBC, which teamed up with Brook Lapping Productions to retell this great and important story, have had their share of television triumphs. They have rarely, however, produced any finer hours than these. (Washington Post)

This finely wrought PBS documentary is a remarkable story of determined, against-the-odds resistance, led by the staunch, inspirational Churchill. The producers tell it all in careful fashion, melding historical documents and experts, old footage, and, most powerfully, the testimony of regular folk who lived through it. Yes you can find WWII documentaries aplenty on cable these days. But you have to search long and hard to find one with this kind of richness in the reporting and craftsmanship in the telling. (Chicago Herald Tribune)

A wonderful oral history of Great Britain during the Dunkirk evacuation and the Battle of Britain in the tradition of Stephan Ambrose; recommended for all collections. (US Library Journal)