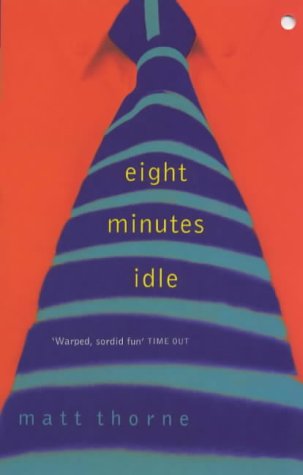 When his father gets knocked over in a car accident, Dan is forced to economise, give up the bedsit the two of them share and secretly move into the call centre where he works. He takes with him a Ginger Tom called John and the telephone numbers of seven women his dad wants him to contact. Soon, the boundaries between Dan's life and work dissolve completely, and, if weren't for the secrecy, his twenty-four hour residency at the call centre would mark him out as the perfect employee.

Eight Minutes Idle focuses on the flip side of office existence, examining the strange things that can happen to the human brain after one too many hours in front of a terminal. It also explains how to turn your workplace into a dating agency, why it's a bad idea to sleep with your boss and exactly what's going on at the other end of the phone while you're left waiting on hold.

a dextrous, assured, engrossing fiction, written with a good ear for speech and a keen eye for details (TLS)

"In an accomplished first novel...occupying an emotion no-man's land between RITA, SUE & BOB TOO and WISH YOU WERE HERE, Thorne describes sex, boredom and a lifetime of morning-afters in a British seaside town" THE INDEPENDENT

To sustain such a story over a book of this length signals a gravity-defying performance. Even so, Eight Minutes Idle never lets on quite how smart it is (Independent)

"His book captures perfectly the bleak spirit of English seaside towns, and its troubled hedonistic heroine is a memorable creation"

Thorne is an extraordinary writer ... A courageous, testing novel (Independent on Sunday)

"A tour de force of accurate and sharp writing about sex from a woman's viewpoint. Astonishing."

Eight Minutes Idle
This is a semi-autobiographical novel about a man called Dan and his father (who is much like my father) who live together in a one-bedroom apartment. When Dan's Dad is knocked over in a road accident, Dan is forced to move into the call-centre where he works. His Dad also gives him the phone numbers of seven women he has been involved with, and this is the start of a thriller plot that grows steadily stranger. The book has been bought by Feelgood Fiction and FilmFour, and should soon be appearing as a film.

Book Description Paperback. Condition: Very Good. The book has been read, but is in excellent condition. Pages are intact and not marred by notes or highlighting. The spine remains undamaged. Seller Inventory # GOR003852390

Book Description Sceptre, 1999. Paperback. Condition: Good. All orders are dispatched the following working day from our UK warehouse. Established in 2004, we have over 500,000 books in stock. No quibble refund if not completely satisfied. Seller Inventory # mon0005061693

Book Description Sceptre, 1999. Paperback. Condition: Very Good. All orders are dispatched the following working day from our UK warehouse. Established in 2004, we have over 500,000 books in stock. No quibble refund if not completely satisfied. Seller Inventory # mon0005292870

Book Description Sceptre, 1999. Paperback. Condition: Used; Good. **Simply Brit** Shipped with Premium postal service within 24 hours from the UK with impressive delivery time. We have dispatched from our book depository; items of good condition to over ten million satisfied customers worldwide. We are committed to providing you with reliable and efficient service at all times. Seller Inventory # mon0001580182

Book Description Sceptre, 1999. Paperback. Condition: Used; Good. **SHIPPED FROM UK** We believe you will be completely satisfied with our quick and reliable service. All orders are dispatched as swiftly as possible! Buy with confidence! Aloysius Ihezie. Seller Inventory # mon0001652036

Book Description Sceptre, 1999. Paperback. Condition: Very Good. Eight Minutes Idle This book is in very good condition and will be shipped within 24 hours of ordering. The cover may have some limited signs of wear but the pages are clean, intact and the spine remains undamaged. This book has clearly been well maintained and looked after thus far. Money back guarantee if you are not satisfied. See all our books here, order more than 1 book and get discounted shipping. . Seller Inventory # 7719-9780340738832

Book Description Sceptre 04/11/1999, 1999. Paperback. Condition: Very Good. Shipped within 24 hours from our UK warehouse. Clean, undamaged book with no damage to pages and minimal wear to the cover. Spine still tight, in very good condition. Remember if you are not happy, you are covered by our 100% money back guarantee. Seller Inventory # 6545-9780340738832