Items related to All Honourable Men : 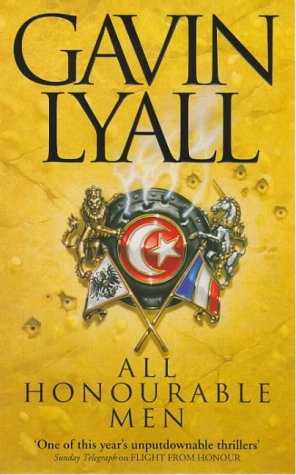 When a local bandit holds engineers of the Baghdad Railway to ransom, Britain is secretly delighted - the railway is a potential threat to her interests in the Persian Gulf. However, she sends Lady Keso to sweet talk the brigand out of his plan in an empty gesture of goodwill.

Stirring period piece [set] in the anxious months before the outbreak of the first world war.
The Sunday Times

Gavin Lyall is a master of his craft
Spectator

'For style without affection, ruthlessness without the usual mindlessness, Lyall is likely to be your man' - The Guardian. When Gavin Lyall's first book, THE WRONG SIDE OF THE SKY, was published in 1961, P.G. Woodhouse wrote: 'Terrific! When better novels of suspense than this are written, lead me to them.' After six more adventure novels including MIDNIGHT PLUS ONE, winner of the Crime Writers' Association Silver Dagger, Lyall created Major Harry Maxim, Whitehall trouble-shooter (played on TV by Charles Dance). Gavin Lyall lives in London and is married to Katharine Whitehorn

Book Description Hodder & Stoughton. Paperback. Condition: Good. A copy that has been read, but remains in clean condition. All pages are intact, and the cover is intact. The spine may show signs of wear. Pages can include limited notes and highlighting, and the copy can include previous owner inscriptions. At ThriftBooks, our motto is: Read More, Spend Less. Seller Inventory # G0340708557I3N00

Book Description Coronet Books, 1998. Paperback. Condition: Good. All orders are dispatched the following working day from our UK warehouse. Established in 2004, we have over 500,000 books in stock. No quibble refund if not completely satisfied. Seller Inventory # mon0004494966

Book Description Coronet 06/08/1998, 1998. Condition: Very Good. Shipped within 24 hours from our UK warehouse. Clean, undamaged book with no damage to pages and minimal wear to the cover. Spine still tight, in very good condition. Remember if you are not happy, you are covered by our 100% money back guarantee. Seller Inventory # 6545-9780340708552

Book Description -. Paperback. Condition: Very Good. All Honourable Men : This book is in very good condition and will be shipped within 24 hours of ordering. The cover may have some limited signs of wear but the pages are clean, intact and the spine remains undamaged. This book has clearly been well maintained and looked after thus far. Money back guarantee if you are not satisfied. See all our books here, order more than 1 book and get discounted shipping. Seller Inventory # 7719-9780340708552

Book Description Coronet Books, 1998. Paperback. Condition: Used; Good. **Simply Brit** Shipped with Premium postal service within 24 hours from the UK with impressive delivery time. We have dispatched from our book depository; items of good condition to over ten million satisfied customers worldwide. We are committed to providing you with reliable and efficient service at all times. Seller Inventory # mon0001511846

Book Description Coronet Books, 1998. Paperback. Condition: Used; Good. **SHIPPED FROM UK** We believe you will be completely satisfied with our quick and reliable service. All orders are dispatched as swiftly as possible! Buy with confidence! Aloysius Ihezie. Seller Inventory # mon0001410715

Book Description Paperback. Condition: Very Good. The book has been read, but is in excellent condition. Pages are intact and not marred by notes or highlighting. The spine remains undamaged. Seller Inventory # GOR001124240

Book Description Paperback. Condition: Good. The book has been read but remains in clean condition. All pages are intact and the cover is intact. Some minor wear to the spine. Seller Inventory # GOR000940645