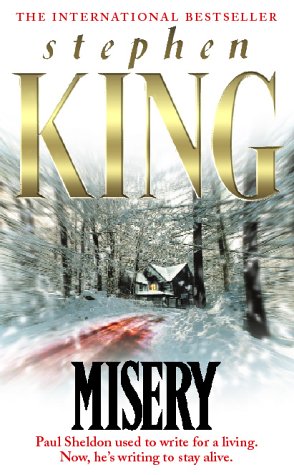 After a car crash, writer Paul Sheldon is saved by his number one fan. She brought him home, splinted his mangled legs, and all he had to do in return was write a very special book, one all about her favourite character. Because if he didn't, if he was bad, she would be cross - very cross.

In Misery, as in The Shining, a writer is trapped in an evil house during a Colorado winter. Each novel bristles with claustrophobia, stinging insects, and the threat of a lethal explosion. Each is about a writer faced with the dominating monster of his unpredictable muse.

Paul Sheldon, the hero of Misery, sees himself as a caged parrot who must return to Africa in order to be free. Thus, in the novel within a novel, the romance novel that his mad captor-nurse, Annie Wilkes, forces him to write, he goes to Africa--a mysterious continent that evokes for him the frightening, implacable solidity of a woman's (Annie's) body. The manuscript fragments he produces tell of a great Bee Goddess, an African queen reminiscent of H. Rider Haggard's She.

He hates her, he fears her, he wants to kill her; but all the same he needs her power. Annie Wilkes literally breathes life into him.

Misery touches on several large themes: the state of possession by an evil being, the idea that art is an act in which the artist willingly becomes captive, the tortured condition of being a writer, and the fears attendant to becoming a "brand-name" best selling author with legions of zealous fans. And yet it's a tight, highly resonant echo chamber of a book--one of King's shortest, and best novels ever. --Fiona Webster

A writer of excellence...King is one of the most fertile storytellers of the modern novel (Sunday Times)

One of the great storytellers of our time (Guardian)

Book Description Coronet, 1997. Paperback. Condition: Good. Minor Shelfwear. Good condition is defined as: a copy that has been read but remains in clean condition. All of the pages are intact and the cover is intact and the spine may show signs of wear. The book may have minor markings which are not specifically mentioned. Most items will be dispatched the same or the next working day. Seller Inventory # mon0016952526

Book Description Coronet, 1997. Condition: Good. A+ Customer service! Satisfaction Guaranteed! Book is in Used-Good condition. Pages and cover are clean and intact. Used items may not include supplementary materials such as CDs or access codes. May show signs of minor shelf wear and contain limited notes and highlighting. Seller Inventory # 0340703423-2-4