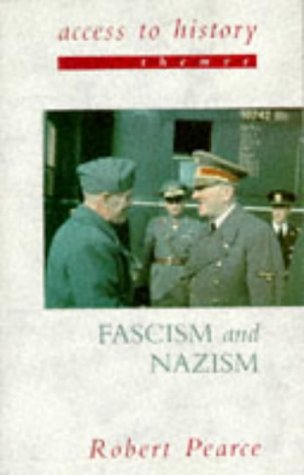 Between 1918 and 1945, fascism spread throughout Europe, dominating several states. It had far-reaching consequences, yet it is one of the most problematic issues in modern history. This introductory study blends research with accessible narrative on key themes for the higher level student.

It is an absorbing read and will take able students more deeply into a period. (Times Educational Supplement)

Fascism was of profound significance for Europe between 1918 and 1945. It spread throughout the continent and dominated several states, with almost incalculable consequences. Yet fascism is also one of the most problematic issues in modern history. How is the term best defined? How far was fascism a political ideology, and how far merely a "style" of rule? Why did fascism spread so rapidly, and exactly which regimes should be called fascist? In particular, should Nazi Germany be classified as a fascist state, or do the differences between the Hitler and Mussolini regimes outweigh their similarities? Blending research with accessible narrative, the author aims to provide a thought-provoking and readable introdcution to this key theme of 20th-century history. The book is part of the "Access to History" series, which provides concise and readable introductions to major issues in British, European and world history for higher level students. Study guides are included in each chapter.

Book Description Condition: Good. Ships from the UK. Former library book; may include library markings. Used book that is in clean, average condition without any missing pages. Seller Inventory # GRP10627678

Book Description Paperback. Condition: Used; Good. **SHIPPED FROM UK** We believe you will be completely satisfied with our quick and reliable service. All orders are dispatched as swiftly as possible! Buy with confidence!. Seller Inventory # mon0000443254

Book Description Condition: Good. Your purchase helps support Sri Lankan Children's Charity 'The Rainbow Centre'. Ex-library, so some stamps and wear, but in good overall condition. Our donations to The Rainbow Centre have helped provide an education and a safe haven to hundreds of children who live in appalling conditions. Seller Inventory # Z1-H-014-01987

Book Description Condition: Fair. This book has soft covers. Ex-library, In fair condition, suitable as a study copy. Please note the Image in this listing is a stock photo and may not match the covers of the actual item,300grams, ISBN:9780340679647. Seller Inventory # 3807442

Book Description Paperback. Condition: Very Good. WE ARE PROCESSING ORDERS AS NORMAL DURING THIS VIRUS EPIDEMIC, ALL ITEMS ARE SENT BY ROYAL MAIL. DISPATCHED FROM THE UK WITHIN 24 HOURS ( BOOKS ORDERED OVER THE WEEKEND DISPATCHED ON MONDAY) BY ROYAL MAIL. ALL OVERSEAS ORDERS SENT BY AIR MAIL. WE ALSO ACCEPT PAYMENT IN US DOLLARS OR EURO BY BANK TRANSFER. Seller Inventory # mon0000600903