Items related to Russia and the World 1917-1991 (International Relations... 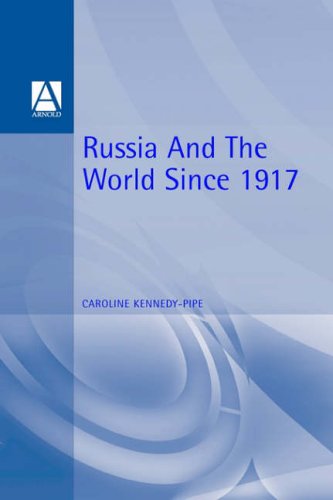 The collapse of the Soviet Union in 1991 had a profound effect upon the nature of international relations. From being a considerable imperial power, the USSR quite literally shrunk to the nineteenth-century borders of Czarist Russia.
This book looks at all the main phases of Russian foreign policy from 1917 to 1991. It pays attention to major events such as the impact of the Second World War on Russia and the emergence of the Cold War after 1945. Looking beyond the traditional story of great power-rivalry (although that forms an important theme), the book highlights the importance of technological, strategic and domestic factors in the making of Russian foreign policy. In particular, it questions whether, given Russia's history, insecurity, and the commitment to revolutionary change, we could actually conceive of a past without confrontation between Russia and the external world. The book also examines the nature of the Kremlin's troubled relationship with its superpower rival, the United States, and focuses on the arenas of conflict in the developing world, the Middle East and Europe.

Book Description Bloomsbury Publishing PLC, United Kingdom, 1998. Paperback. Condition: New. New. Language: English. Brand new Book. An investigation of the evolution of Soviet foreign policy from the Revolution of 1917 until the end of the Soviet era, tracing the origins and characteristics of Soviet external strategies from their Marxist-Leninist roots through to the collapse of communism. There is a careful analysis of Soviet foreign policy alongside the inception of the Bolshevik state with its global manifesto of revolutionary change; Stalin's struggle to survive the twin threats of a revisionist Germany and militant Japan through alliance with the capitalist states; the expansion of Soviet power in the closing stages of World War II and the subsequent Cold War; the Soviet search for some form of accommodation with the West from the 1960s onwards; the attempts of successive leaderships to find a way of regenerating the failing Soviet system and the impact of economic weakness on Soviet behaviour in both the Third World and Eastern Europe.Based on a wide range of sources, including Russian materials that have become available since the end of the Cold War, this work differs from many standard accounts in its emphasis of the factional nature of decision-making over external strategies and its description of competing strains in Soviet thinking about the outside world. Seller Inventory # AAV9780340652053

6. Russia and the World 1917-1991 (International Relations and the Great Powers)

Book Description Bloomsbury Academic, 2020. Paperback. Condition: NEW. 9780340652053 This listing is a new book, a title currently in-print which we order directly and immediately from the publisher. Print on Demand title, produced to the highest standard, and there would be a delay in dispatch of around 10 working days. For all enquiries, please contact Herb Tandree Philosophy Books directly - customer service is our primary goal. Seller Inventory # HTANDREE0144082

9. Russia and the World 1917-1991 (International Relations and the Great Powers)