Items related to The Ascent of Everest

Hunt, John The Ascent of Everest

The Ascent of Everest 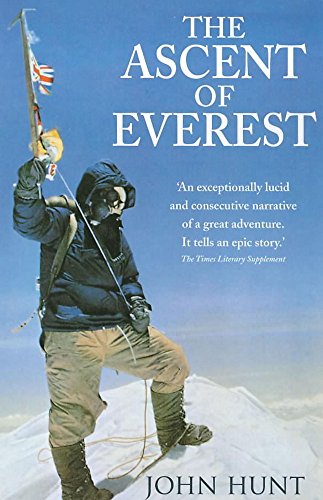 Their achievement provided one answer to the many questions about high-altitude survival which had been asked from the beginning of the century. Their climb was the culmination of a siege-style effort in the expedition led by Sir John Hunt. Indeed, it provided the blueprint for the first ascents of the majority of the remaining 800 metre peaks through the next decade.

But the original ascent remains a classic story of exploring new thresholds and reaching out to achieve the highest point in the world.

An exceptionally lucid and consecutive narrative of a great adventure. It tells an epic story. (The Times Literary Supplement)

When Sir Edmund Hillary and Sherpa Tenzing Norgay stepped onto the summit of Mount Everest on 29 May 1953 they caught the imagination of the world in a way that was to be unmatched until man stood on the surface of the Moon.

1. The Ascent of Everest

Book Description Hodder & Stoughton, 1993. Paperback. Condition: Very Good. The book has been read, but is in excellent condition. Pages are intact and not marred by notes or highlighting. The spine remains undamaged. Seller Inventory # GOR001061029

2. The Ascent of Everest

Book Description Hodder & Stoughton, 1993. Paperback. Condition: Fair. A readable copy of the book which may include some defects such as highlighting and notes. Cover and pages may be creased and show discolouration. Seller Inventory # GOR002996984

3. The Ascent of Everest

5. The Ascent of Everest

Book Description Hodder & Stoughton, 1993. Paperback. Condition: Good. Minor shelf wear Good condition is defined as: a copy that has been read but remains in clean condition. All of the pages are intact and the cover is intact and the spine may show signs of wear. The book may have minor markings which are not specifically mentioned. Most items will be dispatched the same or the next working day. Seller Inventory # wbb0016273435

6. The Ascent of Everest

Book Description Hodder & Stoughton, 1993. Condition: Good. The item shows wear from consistent use, but it remains in good condition and works perfectly. All pages and cover are intact (including the dust cover, if applicable). Spine may show signs of wear. Pages may include limited notes and highlighting. May NOT include discs, access code or other supplemental materials. Seller Inventory # 31UMYP002Q52_ns

7. The Ascent of Everest

Book Description Hodder & Stoughton, 1993. Condition: Good. A+ Customer service! Satisfaction Guaranteed! Book is in Used-Good condition. Pages and cover are clean and intact. Used items may not include supplementary materials such as CDs or access codes. May show signs of minor shelf wear and contain limited notes and highlighting. Seller Inventory # 0340579072-2-4