Items related to The Plains of Passage: Book 4 (Earth's Children... 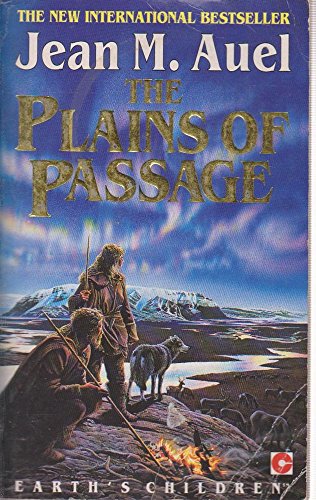 Ayla and Jondalar undertake a journey from the Black Sea to what is now known as the Dordogne, pitting themselves against enemies both human and elemental, and accompanied only by Ayla's pet horses and wolf. This is the fourth in the series, a successor to "The Mammoth Hunters".

Jean Auel's The Plains of Passage, the fourth volume in the Earth's Children sequence, is one of the most massive yet (running to nearly 1,000 pages) and has all the sweep and vigour of the earlier books in the series. There are few writers who demonstrate the sheer range and ambition of Auel in the fantasy field. The Clan of the Cave Bear was a truly ground-breaking work, with its sweeping historical saga crammed with the kind of detail that had never been seen before in the genre. The Valley of Horses and The Mammoth Hunters continued to enthral readers with their breathtaking panoplies of an ancient world.

The Plains of Passage continues the epic description of our civilisation as it was 25,000 years ago. Auel's protagonists Ayla the orphan and Jondalar the traveller decide to forsake the comfort and safety of life with the mammoth hunters by the Black Sea, and set out on a daunting odyssey. Their plan is to traverse a continent, heading for the Cro-Magnon settlement which Jondalar called home as a young man. Their journey across unimaginable distances is fraught with spectacular dangers, and their only companions are the half-tame Wolf, the magnificent stallion Racer and the mare Whinney.

As so often in Auel's work, it's the brilliantly evocative scene-setting that makes her narratives of high adventure so impressive. Characterisation is, as always, functional rather than inspired, but it's perfectly suited to the Technicolor landscapes the reader is confronted with. And the descriptive passages are as evocative as ever:

The rising sun peaked over the eastern edge with a blinding burst of light that illuminated an incredible scene. To the west, a flat, utterly featureless dazzling white plain stretched out before them. Above it the sky was a shade of blue she had never seen in her life. It had somehow absorbed the reflection of the red dawn, and the blue-green undertone of glacial ice...

"Thrilling... This magical book is rich in details of all kinds... but it it the depth of the characters' emotional lives... that gives the novel such a stranglehold."
--Cosmopolitan "Gripping."
--Boston Sunday Herald
From the Paperback edition.