Items related to As Thousands Cheer: Biography of Irving Berlin 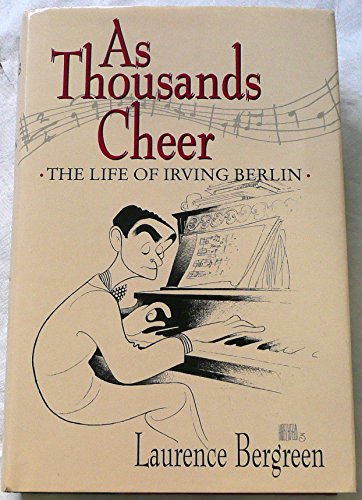 A biography of Irving Berlin, together with a social history of American entertainment. The book details Berlin's roots as a Jew born in Russia, and his escape from the ghetto. He became a singing waiter and started to compose but was never able to read music.

Irving Berlin (1888-1989) was unable to read or write music and could only play the piano in the key of F sharp major; yet, for the first half of the twentieth century he was America's most successful and most representative songwriter, composing such hits as "Alexander's Ragtime Band", "Cheek to Cheek", "Let's Face the Music and Dance", "Puttin' on the Ritz", "White Christmas", "Anything You Can Do", "There's No Business Like Show Business", and "God Bless America". As Thousands Cheer, winner of the Ralph J. Gleason Music Book Award, explores with precision and sensitivity Berlin's long, prolific career; his self-doubt and late-blooming misanthropy; and the tyrannical control he exerted over his legacy of song. From his immigrant beginnings through Tin Pan Alley, Broadway, and Hollywood to his reclusive and bitter final years, this definitive biography reveals the man who wrote 1500 songs but could never quash the fear that, for all his success, he wasn't quite good enough.

Laurence Bergreen is the author of several award-winning biographies, including those of Louis Armstrong, Al Capone, Irving Berlin, and James Agee. He has written for many national publications including Esquire and Newsweek, taught at the New School for Social Research, and served as Assistant to the President of the Museum of Television and Radio in New York. Bergreen has also served as a nonfiction judge for the National Book Awards and as a judge for the PEN/Albrand Nonfiction Award. Voyage to Mars is soon to be an NBC-TV television movie that will premier in spring 2002, and a weekly series that will debut in fall 2002. Bergreen lives in New York City.

1. AS THOUSANDS CHEER: THE LIFE OF