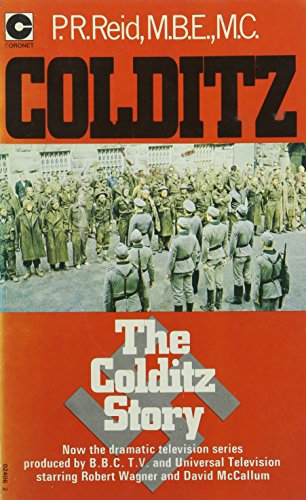 A true classic, this is the original, bestselling story of escape from the dreaded German P.O.W. camp.

Patrick Robert "Pat" Reid, MBE, MC was a British Army Officer and author of two bestselling memoirs of his time as a Nazi Prisoner of War at Colditz Castle in Germany, The Colditz Story and The Latter Days at Colditz.

These books became the basis of a film starring Sir John Mills, and a successful television series starring Robert Wagner and David McCallum.

Buy Used
Condition: Good
. Owner's name on inside. Learn more about this copy

Book Description Paperback. Condition: Used; Acceptable. Dispatched, from the UK, within 48 hours of ordering. The book is perfectly readable and fit for use, although it shows signs of previous ownership. The spine is likely creased and the cover scuffed or slightly torn. Textbooks will typically have an amount of underlining and/or highlighting, as well as notes. If this book is over 5 years old, then please expect the pages to be yellowing or to have age spots. Aged book. Tanned pages and age spots, however, this will not interfere with reading. Damaged cover. The cover of is slightly damaged for instance a torn or bent corner. Seller Inventory # CHL6690253

Book Description Paperback. Condition: Very Good. The book has been read, but is in excellent condition. Pages are intact and not marred by notes or highlighting. The spine remains undamaged. Seller Inventory # GOR008183967